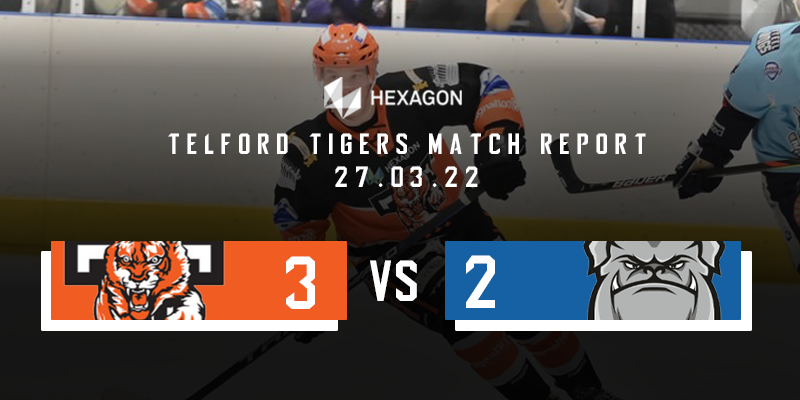 Tigers Fight Back for Four Point Weekend. Hexagon Telford Tigers returned to home ice for the first time since being crowned league champions for the second consecutive season. Tigers had won the title without playing on Friday evening after nearest rivals Swindon lost to Basingstoke. A terrific win away to Milton Keynes the previous evening had reinforced the team’s position as the best team in the league. Tigers’ opponents for the next two games would be Sheffield Steeldogs in the league and then the second leg of the National Cup Final the following Wednesday.

Tigers had a full roster with the exception of Ross Connolly and Brodie Jesson.

The first period of the game was a very fractious one with Tigers disappointed with the officials. Sheffield scored the only goal of the period on the power play after Danny Rose had been called for delay of game. Lee Bonner tipped a Jack Brammer shot past Brad Day from close range.

As the period progressed Tigers’ Scott McKenzie was slashed away from the puck by Lee Haywood but no call was made. A further cross-check from Haywood against McKenzie saw the Tigers’ forward retaliate and get called for slashing. The penalty angered the whole Tigers bench and when play restarted Joe Aston went after Haywood and dropped the gloves. Haywood turtled and threw himself down to the ice and refused to fight, meaning Aston was ejected from the game and given seven minutes of penalties. With Tigers facing a man disadvantage for a lengthy period, they were helped by Sheffield’s inability to stay out of the penalty box themselves as they were awarded two separate penalties during their power play.

Tigers started the second period with purpose and equalised within the first minute. Bayley Harewood took possession of the puck on the Tigers’ blue line and skated half the length of the ice and with Dimitri Zimozdra in the Sheffield goal expecting a pass, Harewood shot low into the net to draw the sides level. Shortly after, Nathan Ripley was called for slashing giving Tigers a power play. McKenzie sent a shot in on goal that Austin Mitchell-King deflected past Zimozdra to give Tigers the lead.

Sheffield equalised midway through the period with a power-play goal of their own. Jason Hewitt shooting in off the crossbar with Day screened by a Sheffield forward.

Telford hit back with a superb goal. Ricky Plant held the puck and waited for the perfect moment to send a pass to McKenzie who then sent a drop pass behind him where Vladimir Luka was waiting to smash the puck past Zimozdra for Tigers’ third goal.

Sheffield pushed for the equaliser and Tigers were indebted to Day on a number of occasions. Day made one terrific save from a point-blank Nathan Ripley shot. With time running out, Sheffield pulled Zimozdra from the goal to add an extra attacker but resolute Tigers defending ensured that the champions would gain a four-point weekend and with two games remaining of the league season, are nine points ahead of second-placed Swindon.

Tigers now play Sheffield in the second leg of the National Cup final on Wednesday 30th March trying to wipe out a three-goal deficit from the first leg.

After the game Head Coach Tom Watkins, commented, “It has been another good weekend for us and another four-point weekend. I really liked our attitude tonight given that there was nothing on the line. I thought we managed the game well and stuck up for one other as you would expect us to. We take a lot of belief and confidence into the upcoming games and have had some very impressive performances as a team and from individuals who have really been on their game of late.”