Tigers Fight Back in Vain. 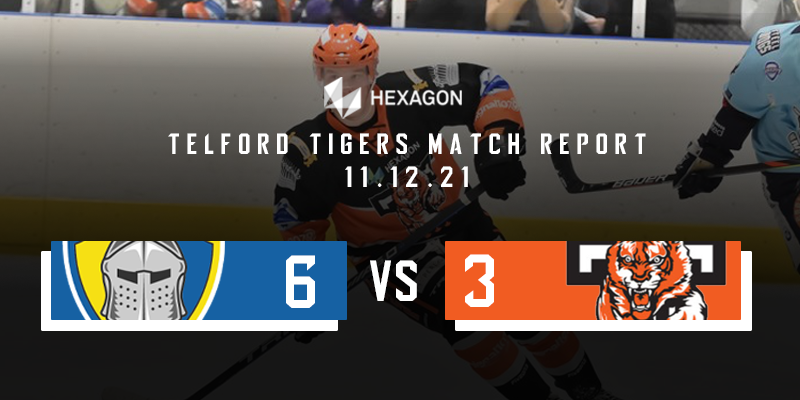 Tigers Fight Back in Vain. Hexagon Telford Tigers travelled to Yorkshire to take on the Leeds Knights with a short bench after losing Jack Hopkins, Fin Howells and Sam Watkins to Great Britain U20 call ups. With Tigers still missing Ricky Plant, Jack Watkins and Ross Connolly through injury, it looked an uphill task from the start.

A largely uneventful first period was punctuated with one goal and Tigers scored it. The line of Andy McKinney, Scott McKenzie and Vladimir Luka was the most dangerous for Tigers and it was no surprise that they combined for the only goal of the period. With McKinney finishing off a pass from McKenzie, shooting low past Sam Gospel in the Leeds’ goal.

Tigers made a poor start to the second period and conceded two goals early on. Kieran Brown scored in the second minute and Cole Shudra scored shortly after.

With the period coming to an end, the short bench was taking its toll as Tigers fell further behind. Jordan Fisher shooting past Brad Day to put Leeds firmly in control of the game 3-1 ahead.

Tigers lost the services of McKinney early in the third period after the forward was assessed a game penalty for elbowing and ejected from the game. Facing a five minute Leeds power play, the game looked lost, but a sterling defensive effort saw the penalty killed off without conceding.  With ten minutes left in the game, Tigers gave themselves a chance with a second goal. Austin Mitchell-King halved the deficit with an excellent finish past Gospel. Tigers drew level three minutes later with McKenzie scoring after being sent clear by Joe Aston.

However, Tigers conceded within a minute of tying the game, Robert Streetly putting Leeds back ahead.  Telford were then handed a great chance to get back into the game with a power-play after Brown was called for cross-checking. A tired power-play unit could not score and allowed Shudra a breakaway which he scored on, to put the game beyond Tigers.

Day was pulled from the goal for the final thirty seconds, allowing Leeds to score an empty-net goal from Ben Solder and end a disappointing night for the team.

After the game, Head Coach Tom Watkins, commented, “I’m absolutely gutted, gutted to lose the game. The whole team put a lot into that game and to come away without anything hurts after the effort and commitment we played with tonight.

Everyone is coming onto the team bus with ice packs or nursing some injury tonight. We battled really hard and got ourselves back into it, despite being up against it with six players out of the line-up. Then, losing Silvs (Silverthorn) to an injury and Andy (McKinney) to a game misconduct most teams wouldn’t be able to compete, but the team stepped up and were very competitive all night. Our penalty kill was solid and killed thirteen minutes in penalties and the five-minute kill was huge to give us a chance to get back in the game but it just wasn’t enough.”