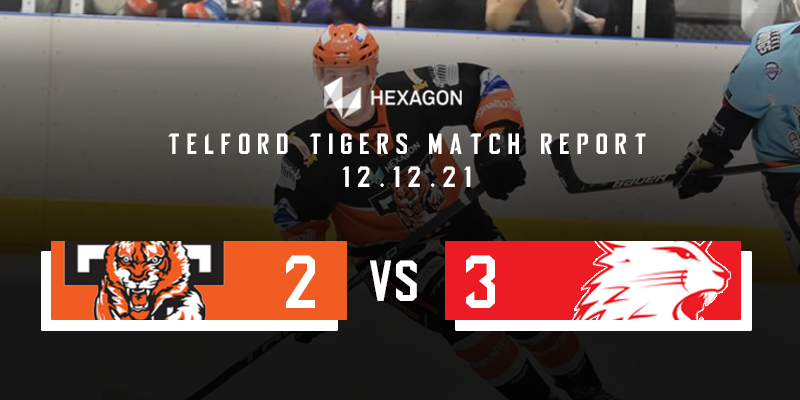 Tigers Fightback Falls Short. Hexagon Telford Tigers returned to home ice after a defeat to Leeds Knights with a short benched team and a number of injured players playing through the pain. Head Coach Tom Watkins reacted by bringing in a number of players from the Tigers 2 squad – Brandon Anderton, Callum Griffin, Oli Hunt and Ollie Johnson all playing up. Watkins himself also decided to take to the ice due to the number of players missing from the lineup. With Ricky Plant, Jack Watkins and Ross Connolly joined on the sidelines by Jason Silverthorn and the team missing Jack Hopkins, Sam Watkins and Fin Howells through call ups to the Great Britain U20 squad, it was going to be a tough game playing against league leaders, Swindon Wildcats who were on a run of only 1 defeat in 8 games.

The game started with end to end action and both teams trading chances. Swindon had the better of the opening period and should have been ahead early on. With Bailey Hind-Pincher in the penalty box for Swindon for high sticking, Tigers had their only power play of the period. But, Swindon had two short-handed breakaways which should have been punished. First, Aaron Nell was stopped by Brad Day in the Tigers’ goal with a pad save, closely followed by another terrific save this time from Tomasz Malasinski. Nell went close again but shot wide from close range. Tigers battled hard throughout the period and had too many shots that were straight at Renny Marr in the Swindon goal.

Tigers started the second period well and had plenty of shots on Marr’s goal but again, too many shots that Marr could see and save. Midway through the period, Swindon opened the scoring with a fortuitous bounce. A Reed Sayers’ shot was well blocked by a Tigers’ defender but the puck dropped perfectly to Floyd Taylor who shot past Day before he could react. The game started to get more feisty as the period progressed and missed calls by the officials upset the Tigers’ faithful. Scott McKenzie was hit after the whistle by Sam Godfrey but nothing was called and when Andy McKinney was boarded, the officials conferred but gave nothing. This clearly upset McKinney as on the next shift he went after Sam Bullas who refused to fight despite McKinney dropping the gloves. Godfrey grabbed hold of McKinney to prevent him from fighting and referees Hands and Poulton lost control of the game, ending the period five seconds early as they conferred about what penalties to give.

At the start of the third period, the penalties were announced and Tigers were even more up against it. McKinney received two minutes plus a further ten minutes for fighting and five minutes for resisting an official. Taylor received five minutes for third man in and five minutes for resisting an official. The upshot of the penalties was that Tigers would face seven minutes of Swindon power play. Aaron Nell scored for Swindon to double their lead, but Tigers managed to fight off the rest of the penalties and then had a power-play chance of their own when Declan Balmer was called for slashing. Disaster struck, however, as Tigers were caught on the breakaway again whilst shorthanded. Malasinski sent the puck up the ice and Day left his goal to play the puck but Nell beat him to it and shot into the empty net to put Swindon three goals ahead.

Tigers never gave up and managed to get on the scoresheet late in the game. Scott McKenzie faked a shot and passed to Brodie Jesson who shot through Marr and into the net. The goal saw Tigers’ fans throw teddies on the ice as part of the annual Telford Tigers Teddy Bear Toss, with all teddies donated to the Princess Royal Hospital Children’s Ward.  Shortly after, Tigers got another goal back with a terrific passing move between Austin Mitchell-King and Thomas McKinnon being finished off by Brandon Anderton. Despite pulling Day from the goal for the last minute of the game to add an extra attacker, Tigers could not get the equaliser and ended the weekend with consecutive defeats.

After the game, Head Coach Tom Watkins commented, “I’m really proud of the team, all the players stepped up and it was similar to the Leeds game the night before, we played with a huge amount of spirit and heart. It’s tough to lose, we don’t like it but sometimes you have to look at the bigger picture and hold your hands up and say we gave it everything we had. Another night it’s a different result and considering the seven guys we had out of the lineup, I think we were very close to getting a point and taking it to overtime.”