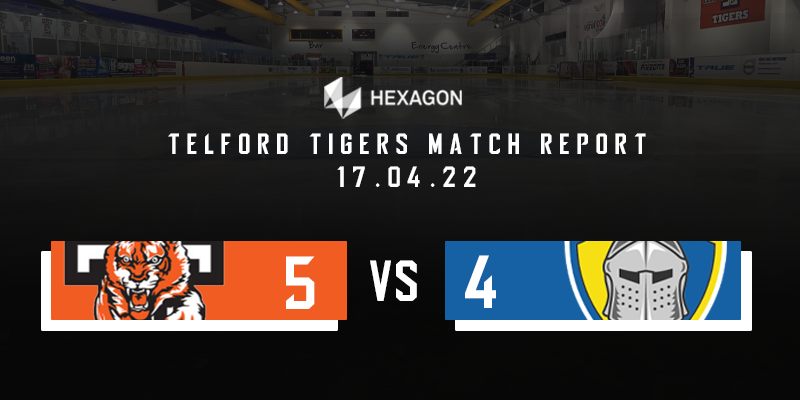 Tigers Fightback to Win Thriller. Hexagon Telford Tigers returned to home ice after a disappointing defeat on the road in Milton Keynes. Tigers lost their first game of the playoff group stages and needed a win over Leeds Knights to get back on track. With Leeds losing in overtime to Bees the previous night, Tigers knew that a win in regulation and a Milton Keynes win over Bees would mean that they would qualify for the semi-finals in Coventry at the end of the month.

Tigers were able to ice a full roster with the exception of long term absentee Ross Connolly and Jack Hopkins.

Tigers made a bright start to the game and had almost constant pressure on Sam Gospel in the Leeds’ goal for the opening ten minutes. Tigers were almost caught out when on the power play after Leeds’ Ben Solder was in the penalty box for tripping. Leeds broke away shorthanded and Day made a terrific double save.

Despite the good start, Tigers fell behind when Cole Shudra’s slap shot from the right circle deceived Day and went over his glove into the top left-hand corner of the goal to give the Knights the lead. Worse was to follow as Matty Davies set up James Chilcott who shot low past Day to double the Knights’ lead.

Tigers struck straight back with a goal twenty seconds later. Andy McKinney made a terrific stick check to win possession of the puck and sent Fin Howells in on goal. Howells shot past Gospel to halve the deficit.

Day made another terrific save early in the second period from a Cole Shudra breakaway. The save was even more important as Tigers equalised soon after. Scott McKenzie made a brilliant break on goal and shot at Gospel who saved the initial shot. McKenzie got to the rebound and Gospel made another save but the puck broke kindly for Howells to tap in from on the line for his second goal of the game.

Tigers were having no luck at all and Leeds went back in front with a fluke goal. A Leeds’ pass went astray in the Tigers’ defensive zone but bounced off Kieron Brown and flew past Day.

Telford hit back with a third goal and it was an absolute rocket of a shot. Howells collected the puck on the Leeds’ blue line and, with Gospel expecting a pass, Howells unleashed a stunning wrist shot into the top corner of the goal to draw the sides level again and complete his hat trick.

The game was getting fractious and Bayley Harewood and Cole Shudra decided to drop the gloves with Harewood being the clear winner, knocking Shudra to the ice with a perfect right-hand punch.

Leeds regained the lead again when Matty Davies hit a slap shot that went in off Day’s glove.

Tigers were disappointed with the officials the previous evening and had cause to question a number of calls that went against them. Nick Oliver was called for cross-checking for what looked like a perfectly legitimate hit then Deakan Fielder was called for interference when competing for the puck. Leeds ended the period on the power play after Fielders’ penalty but scored a fourth goal whilst shorthanded. Gospel tried to play the puck behind the Leeds’ goal but Jason Silverthorn stripped him of the puck and scored with a wrap-around shot into the empty net.

Tigers took their first lead of the night early in the third period. Ricky Plant and Silverthorn combined to cycle the puck back to the Leeds’ blue line where Corey Goodison hit a one time slap shot that beat Gospel low down.

Leeds continued to threaten the Tigers’ goal but Day stood tall on a number of occasions to keep Tigers ahead.

Tigers were assessed another penalty late on that angered the crowd. Harewood was cross-checked and retaliated with a cross-check of his own but only the one penalty was called – against Harewood.

Leeds’ called a time out and pulled Gospel from the goal to add an extra attacker but some resolute defending by the Tigers’ penalty kill unit saw the game out and gave a vital win to the Shropshire team.

With Bees winning in a penalty shoot-out over Milton Keynes, the group placings will be decided in the final weekend with Tigers travelling to Leeds on Friday (22nd) and playing Milton Keynes at home on Sunday (24th).

After the game Head Coach Tom Watkins, commented, “It was an important win and a solid third period where we shut the game down and were very hard to break down. I don’t think Leeds had any real quality chances in the third period and I thought we wore Leeds down, were smart in our battles along the walls and managed the game well. What a great night for Fin (Howells), scoring a hat trick! Everything he touches right now is going in the net. As a line Finn, Sam (Watkins) and Andy (McKinney) are contributing at both ends of the rink, good defensively, they transition from the defensive zone very well with speed, are creating a lot of quality opportunities and are disciplined with their positioning in the offensive zone. I think it was a very exciting edge of your seat game of hockey to watch.”