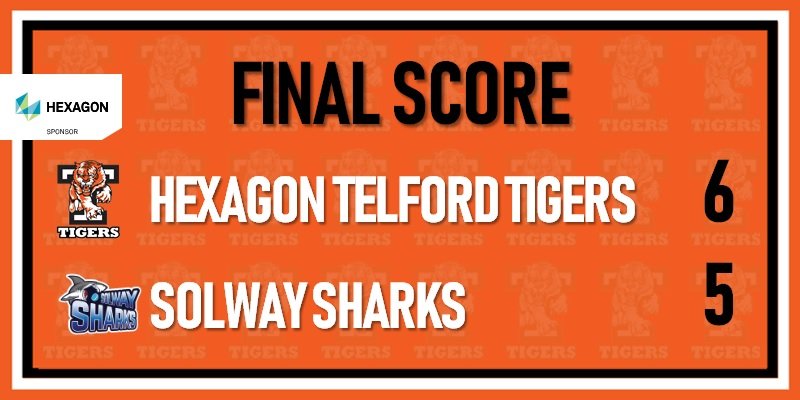 Tigers’ Four Point Weekend Secures Top Spot.  Hexagon Telford Tigers 1 took on Solway Sharks in the second of back to back games this weekend on Sunday night at Telford Ice Rink. Tigers had emerged 7-3 winners in Dumfries in a close fought game to maintain second place in the league. Tigers came in to the game knowing that a win would mean they could move into top spot in the league ahead of current leaders Sheffield Steeldogs who were playing their final NIHL North Cup group game in Edinburgh the same evening.

The game got off to a fast start and Tigers almost scored with the opening attack, Jason Silverthorn’s shot went through Solway net minder Kyle Johnston but was cleared off the line. Solway’s reprieve was short lived when, with the next attack, Silverthorn found the unmarked Scott McKenzie between the hash marks and McKenzie scored with a wrist shot that gave Johnston no chance. Tigers’ lead lasted only 17 seconds as Solway equalised with their first shot on goal. Lewis Baldwin’s shot hit the side of the Telford goal and rebounded into the path of Joe Coulter who hit a shot low past Tom Hovell in the Tigers’ goal.  In the 4th minute, Tigers regained the lead. Doug Clarkson hit a slap shot which rang off the cross bar and landed perfectly for Andy McKinney to tap home. Tigers added a third goal a minute later, again from McKinney. This time McKinney skated into the Solway defensive zone and unleashed a powerful shot into the top left hand corner of the goal. Tigers then had a power play after Coulter was given an interference penalty.  A remarkable sequence of play saw Clarkson hit the cross bar with a shot then the puck was recycled to him. He then hit the left post twice with shots being just a few seconds apart.

In the 16th minute Solway cut the deficit to 3-2 after some poor defending by Tigers left Ross Murray with a free shot at Hovell. The initial shot was saved but Hovell was beaten by Cale Tanaka on the rebound.  Tigers ended the period ahead by one goal.

Tigers made the worst possible start to the second period, conceding a goal within seventeen seconds of the restart. Ross Murray’s shot hit the side of the goal and rebounded for Peter Gapa to circle the net and put the puck into the goal to level the game at 3-3. Tigers regained the lead two minutes later when Ricky Plant played a brilliant pass to Scott McKenzie in front of goal, McKenzie slid the puck between Johnston’s leg for his second goal of the night and Tigers’ fourth.  Solway then had a chance to level the game when Corey Goodison was awarded a tripping penalty giving them a power play. Solway almost levelled the game again when a shot hit Hovell on the shoulder and the puck rolled behind him and appeared to be rolling into the goal, Jack Watkins managed to get to the puck before it crossed the line and cleared it to the relief of the Telford crowd. As the power play ended and Tigers returned to full strength, Clarkson sent a stretch pass to Adam Taylor who scored Tigers’ fifth goal with a terrific finish.

Tigers then had a glorious chance to increase their lead when Solway’s Coulter and Josh Grieveson were given penalties giving Tigers almost two minutes of five on three power play time. Jonathan Weaver hit the cross bar with a fierce slap shot but Tigers could not make the extra players advantage pay.

Tigers’ Brodie Jesson had a break away but completely missed the goal with his shot.

Tigers were made to pay for the missed chances when Solway pulled another goal back through Gapa.  Tigers ended the period under severe pressure and hanging onto their 5-4 lead.

Midway through the third period, Tigers again had a five on three power play when Ross Hancock and Kyle Horne were given penalties. This time Tigers took full advantage of the extra players when Weaver kept the puck in at the blue line, skated in on goal and hit a wrist shot past Johnston for Tigers’ sixth goal. As the period progressed, Solway had more and more possession and were a continuous threat. Hovell was forced to make a number of last ditch saves to maintain Tigers’ lead. Into the last five minutes of the game, Tigers’ Warren Tait was given an interference penalty and Solway laid siege to the Tigers’ goal. Eventually the pressure paid off when Scott Henderson scored Solway’s fifth goal after a goalmouth scramble to reduce Tigers’ lead and set up a frantic last few minutes.  For the final minute Solway pulled net minder Johnston for an extra attacker. Plant broke out of Tigers’ zone and headed towards the empty net but was pulled down by two Solway defenders. Referee Rose played on, however, much to Plant’s disgust. Clarkson then set up McKinney for a shot at the empty net but Horne blocked the shot on the line. Tigers managed to run down the clock and win a pulsating end to end game, ensuring they returned to the top of the league.

After the game coach Tom Watkins commented, “There were lots of goals tonight and every time we got ahead Solway kept finding a way back in, which led to a tight tense finish.

It certainly wasn’t pretty, but I am pleased we found a way to hold on for the two points and I am very pleased to seal a four point weekend against a good team. We were home very late last night and looked a little fatigued at times, but I felt we moved the puck very well in the first period and probably could have been well ahead after Doug had hit the post three times. We had two miscommunications between Hovy (Hovell) and the defence, which cost us two goals and gave away the momentum on occasions and credit to Solway they battled and made a game of it.

At the end there was a great glove save by Solway’s defender Kyle Horne to deny Andy McKinney when the goal was empty.”

Hexagon Telford Tigers 1 return to play at Telford Ice Rink Sunday 27th January 2019 at 18:00 in the NIHL Moralee Conference against Whitley Warriors. Hexagon Telford Tigers 2 are next in home action at Telford Ice Rink on Saturday 26th January 2019 at 19:00 in the NIHL Laidler Conference against Widnes Wild. For details of all future fixtures, check out the Tigers fixture list and www.telfordtigers.net/tickets for ticket information.