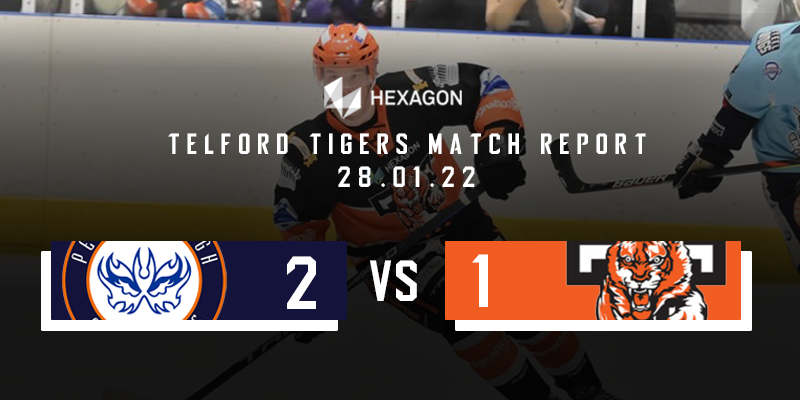 Tigers’ Friday Night Blues. Hexagon Telford Tigers travelled to Peterborough for the first of a gruelling run of eight games in sixteen days. Tigers had returned to the top spot in the league the previous weekend with back-to-back victories over Swindon Wildcats and faced off against the team who had beaten them in their last meeting.

Tigers were almost back to a full roster last week with only long term absentees Jack Watkins and Corey Goodison unavailable. However, Ricky Plant and Sam Watkins were also absent for the game.

Tigers had the better of the first period but early on were forced to kill off an interference penalty on Joe Aston which was exceptionally harsh. The Tigers’ player was punished for what seemed a perfectly legitimate hit. A good penalty kill gave Telford momentum and they scored the only goal of the period shortly after. A weak shot by Jack Hopkins went straight at Jordan Marr in the Peterborough goal but Marr fumbled the save and could only deflect the puck towards Vladimir Luka who accepted the gift and tapped home the opening goal of the contest. Jarvis Hunt had the best chance for the Phantoms, just missing connecting with the puck after a long-range shot deflected his way.

It was a different Phantoms team that came out for the second period and they dominated much of the opening five minutes with Tigers struggling to clear their zone. Luka had a glorious chance to extend the lead with a breakaway but Marr saved with his pads. Tigers would regret the miss when Ross Connolly was called for high sticking giving Peterborough a power play. Petr Stepanek scored for Peterborough with a superb wrist shot over Day’s glove to draw the sides level. Day then pulled off a terrific save from Will Weldon, preventing a certain goal. Tigers saw out the rest of the period with some resolute defending.

Tigers took far too many penalties in the third period and it would be their undoing. Despite killing off back-to-back penalties for Luka and Thomas McKinnon, they were caught out on the next penalty and conceded what turned out to be the winning goal. With some major communication errors, the Tigers had seven skaters on the ice and an easy call for the officials was made. From the resultant power play and face-off, Tom Norton’s shot was tipped past Brad Day into the Tigers’ goal by Glenn Billing for Phantoms’ second goal. Tigers had a late power-play chance to get back into the game but they could not convert and, despite pulling Day from the goal late in the game to add an extra attacker, Peterborough held on and sent Telford to a disappointing defeat.

After the game Assistant Coach Steve Molyneux, commented, “We started off slow, you could tell we were the travelling side on a Friday night. I think it was a pretty even game although at the end of the second period they were all over us and we lost our shape completely. They won the game with two power-play goals and we didn’t capitalise on our own power plays opportunities and they did. I do think we were hungry to win but erratic with our play. We suffered from not clearing our zone when we could and turning the puck over and equally, not playing little chips in behind them to keep the play in their end. All in all, it is a tough place to come and play and we now need to focus on our next game away to Raiders.”