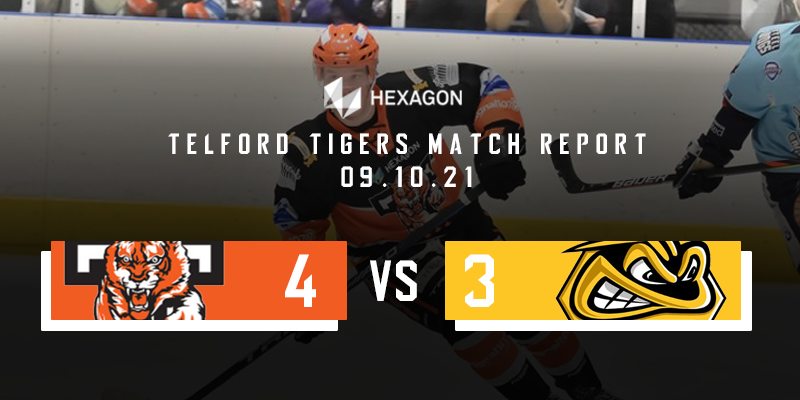 Tigers Hang on to Gain Vital Win. Hexagon Telford Tigers played the first of their final two Autumn Cup group games against Bees and were desperately in need of the two points available. An overnight victory for Swindon Wildcats against Basingstoke Bison had allowed the Wiltshire side to overtake the Tigers for the final qualification place, albeit having played a game more.

Tigers were able to ice a full-strength lineup with the exception of Jack Hopkins.

Tigers dominated much of the first period and Austin Mitchell-King had an early chance but shot straight at Bees’ netminder Adam Goss. It would not be long though before Tigers opened the scoring. Jason Silverthorn’s pass was deflected by the stick of Goss straight into the path of Ricky Plant who took control of the puck and shot low into the net to give Telford the lead.

Bees then had their best chance of the game when Dominik Gabaj was hooked by Jack Watkins as he was about to shoot for goal and referee Alyward called a penalty shot. Gabaj skated in on Jordan Lawday in the Tigers’ goal but shot well wide.

Bees would regret the miss as shortly after James Galazzi was given a slashing penalty and the Tigers took advantage of the extra man. Scott McKenzie sent a pass from behind the goal to the unmarked Silverthorn to score from close range and send the Tigers into the break with a comfortable two-goal lead.

Bees settled into the second period and had an early 2-on-1 breakaway but Lawday made a good save. A penalty strewn period saw both teams have power-play chances and both teams ended up scoring with their final power play of the period. First, Tigers scored whilst Gabaj was in the penalty box for a cross-check. Jonathan Weaver’s blue line shot was tipped in front of Goss by Andy McKinney with the deflection beating the Bees’ netminder to increase Tigers’ lead to three. Then, Bees got on the score sheet when Weaver was serving a boarding penalty. Michael Power’s shot from the right circle going through the legs of Lawday but the Tigers’ net minder complained to the officials that Bees’ Galazzi had slashed his stick, however, referee Matthews awarded the goal.

Tigers still held a two-goal lead but were put on the back foot in the third period when Gabaj scored with a terrific shot that gave Lawday no chance. Tigers were under pressure but added a fourth goal to ease the nerves. Ross Connolly scoring his first Tigers’ goal with a shot from the right circle beating Goss low down. The goal was the Tigers’ third power-play goal of the night.

With just 30 seconds of the game left, Stuart Mogg pulled another goal back for Bees, shooting between Lawday’s pads to cut Tigers’ lead to one. With so little time left on the clock, the Tigers were able to control the puck and see out the game to secure a vital win ahead of the final game of the group stage against the Raiders.

Head Coach Tom Watkins said after the game, “I’m pleased to get the win tonight in what was a tough game. We started well and took a two-goal lead but credit to the Bees, they were very resilient and tough to play against.

We took some unnecessary penalties in the offensive zone which is frustrating and it affected our rhythm at times.

I felt we played with more jump in the third period and it was good to see Ross (Connolly) come up with the game-winning goal and he has had a solid start to the season.

It was a very emotional evening for us as before the game we paid tribute to our friend James Lu who passed away earlier this year and is sadly missed by many.”