Tigers Have A Mountain To Climb After First Leg Loss 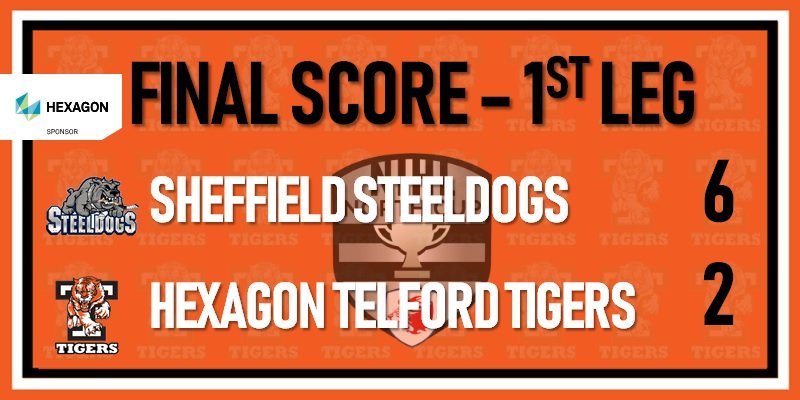 Tigers Have A Mountain To Climb After First Leg Loss. Hexagon Telford Tigers 1 travelled to Ice Sheffield on Friday night for the first leg of the NIHL North Cup Final against Sheffield Steeldogs.  Tigers had qualified for the final with a victory over Solway Sharks and Sheffield had beaten Hull Pirates in a dramatic penalty shoot out to earn their place in the final. Sheffield had won convincingly the last time the two teams had met in Sheffield in the league but Tigers had won 5-1 in Sheffield in the group stages of the cup.  Jonathan Weaver returned after sitting out both games last weekend. Tigers were able to add Fin Howells, Jed Moreland, Callum Bowley and Zac Brown as back up net minder.

Telford started with Sam Gospel in goal, with Dimitri Zimozdra in goal for Sheffield.

Tigers started what proved to be a poor period in disappointing fashion. Ashley Calvert had a one on one chance within the first 30 seconds of the game, with Gospel blocking the shot with his pads. However, just a minute later, Sheffield opened the scoring. An unlucky bounce off the boards behind the Tigers’ goal left Gospel facing two unmarked Sheffield attackers, Alex Graham tapped in from almost on the goal line to give Sheffield the lead. Shortly after, Sheffield had a second goal. Tigers’ defence lost their coverage allowing Adrian Palak to break in on goal and send a shot into the side netting just inside the goal. Tigers’ woes continued when Ricky Plant was assessed a tripping penalty behind Sheffield’s goal giving the Steeldogs a power play.  Sheffield took full advantage of the extra man with Milan Kolena finding the unmarked Duncan Speirs at the far post to tap into the net for Sheffield’s third goal. Coach Tom Watkins called a time out after the goal.

Sheffield continued to attack at will and, had it not been for Sam Gospel, the game would have been over after the first period. Gospel made great saves from Cameron Brownley and Speirs when both broke free of the Tigers’ defence.  Tigers finally got on the score sheet late in the period. Scott McKenzie won the puck behind Zimozdra’s goal and played a perfect pass in front for Andy McKinney to fire home to reduce Sheffield’s lead to 3-1. There was still time for Gospel to pull off another terrific save this time from Andrew Hirst to give Tigers hope of a comeback.

The second period continued in the same vein with Tigers getting caught out defensively too often. Three minutes into the period, Kolena broke into the Telford defensive zone and unleashed a fierce slap shot that flew into the top corner of the net giving Gospel no chance and Sheffield a fourth goal. Things got worse two minutes later when Kolena led a two on one breakaway and found the unmarked Speirs who beat Gospel with a wrist shot to put Sheffield 5-1 ahead. Tigers’ luck was most definitely out when Corey Goodison’s slap shot hit the post, bounced off Zimozdra and went behind him but didn’t cross the line and was cleared by a Sheffield defender. Tigers’ passing was not at its best and numerous chances to break were spurned.  Referee Hewitt was causing considerable frustration on the Tigers’ bench with a number of missed calls, including a dangerous hit by Kolena on McKenzie that went unpunished. Tigers ended the period on the power play after Ben Morgan tripped McKinney but could not get past Zimozdra. Tigers would carry over a minute of the power play to start the third period.

Sheffield managed to kill off the penalty and Tigers’ bad luck continued, Silverthorn thought he had scored in the 42nd minute but Hewitt disallowed the goal and it was unclear why. Then, Adam Taylor’s goal bound shot was deflected wide by a Sheffield defender’s skate and both Silverthorn and Ricky Plant went close but could not score.  Tigers finally scored a second goal in the 55th minute whilst on a five on three power play after Sheffield’s Ashley Calvert and Nathan Salam were awarded penalties. Jonathan Weaver scoring with a trade mark slap shot from between the hash marks to reduce the deficit to three goals.

As the third period entered the final five minutes, the game got out of hand. Warren Tait accidentally skated into Zimozdra which Hewitt missed but Sheffield’s Tom Barry skated after Tait for retribution. Corey Goodison intervened and dropped the gloves with Barry. Tait was awarded an interference call despite the referee not calling the penalty at the time the incident occurred. As the game entered the final minute, Jordan Stokes was held behind the Tigers’ goal but when he tried to free himself Hewitt awarded a penalty to Stokes for holding and ignored the original infraction. McKinney took exception to a cross check from Kolena and dropped the gloves but Kolena refused to engage and dropped to the ice to avoid the fight. McKinney was awarded a match penalty for roughing meaning he was ejected from the game and will now miss the second leg.  The penalties meant that Sheffield would end the game with twenty five seconds of five on three power play time. Sheffield made the two extra men count when Calvert hit a wrist shot into the roof of the net to give them a sixth goal. As the clock wound down to the final buzzer, Scott McKenzie, Danny Rose and Joe Aston all dropped the gloves with Sheffield players to end a feisty game. Tigers trail by four goals ahead of the second leg in Telford on Saturday night.

After the game coach Tom Watkins commented, “I thought at times we looked like a team that had never been on the ice together. They got a lucky break for the first goal and from there we were chasing the game. Every shift we gave up grade A scoring chances because of simple fundamental errors and breakdowns on assignments. The referee let the game get out of control because of his inability to make strong decisions on dangerous plays a number of times. Scott (McKenzie) has his knees taken out mid-ice, and there was no call and also (Duncan) Speirs breaks his stick across one of our player’s upper body with a cross check and yet he only receives a minor penalty.”

Watkins added, “This tie’s not over, the boys showed the type of spirit we need by sticking up for each other late in the game. That is what we will need tomorrow to give us a chance to win.”