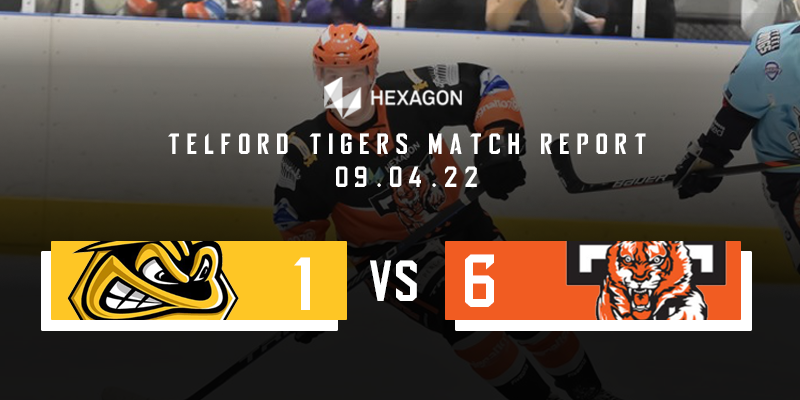 Tigers Hit Bees For Six. Hexagon Telford Tigers opened their playoff campaign with a trip to Slough to take on Bees. Tigers, the league champions, were allocated the top seed in the group stages and started back-to-back games against the team that qualified in eighth place. Tigers ended the league season with five straight wins and were looking to start the playoffs with a win.

Tigers were able to ice a full roster with the exception of Ross Connolly who remained unavailable through injury and Jack Hopkins who was away with the Great Britain U18 team.

Tigers made a strong start to the game and opened the scoring in the third minute. Sam Watkins had just stepped on the ice for the first time in the game and won a battle along the boards with a Bees’ defender. Watkins sent the puck towards goal where Andy McKinney was perfectly placed to deflect the puck past Adam Goss.

Tigers dominated much of the period and Bayley Harewood hit the post with a wrist shot from the slot. Midway through the period, Tigers added a second goal. Vladimir Luka sent a pass from behind the goal to Fin Howells who shot straight at Goss but Scott McKenzie buried the rebound to double Tigers’ lead.

Tigers started the second period with a power-play after Bees’ Joe Baird was called for slashing at the end of the first period. As the power play was just about to expire, Danny Rose sent a shot from the blue line in on goal and Fin Howells managed to tip the puck past Goss for a third goal. Less than a minute later, Tigers scored the fourth goal. Harewood sent a pass out of the Tigers’ defensive zone which sent Austin Mitchell-King clear on goal. Mitchell-King shot high over Goss’ glove into the top corner of the net.

Bees pulled a goal back on the power play through Juha Lindgren after Brodie Jesson had been called for tripping. Despite conceding a goal, Tigers continued to dominate the contest and scored a fifth goal in the dying seconds of the period whilst shorthanded. Mitchell-King was serving a roughing penalty when Ricky Plant took possession of the puck at centre ice with just five seconds remaining on the clock. Plant managed to beat a Bees’ defender and send a backhanded shot over Goss and into the net before the buzzer to signal the end of the period sounded.

Tigers scored the final goal of the contest after six minutes of the third period. McKenzie scored his second of the game, shooting home from close range after Harewood had made a terrific pass, allowing McKenzie time and space to shoot low past Goss.

Tigers maintained possession well throughout the rest of the game and ran out the clock to start their playoff campaign with a terrific victory on the road.

After the game Head Coach Tom Watkins, commented, “It was a good, solid start on the road with a professional performance. We did the little things well, made good decisions with our puck management and did a good job to shut the game down through the third period. I felt we were in control all night. We know tomorrow will be a very different game so mentally we need to come to the rink ready to compete.”