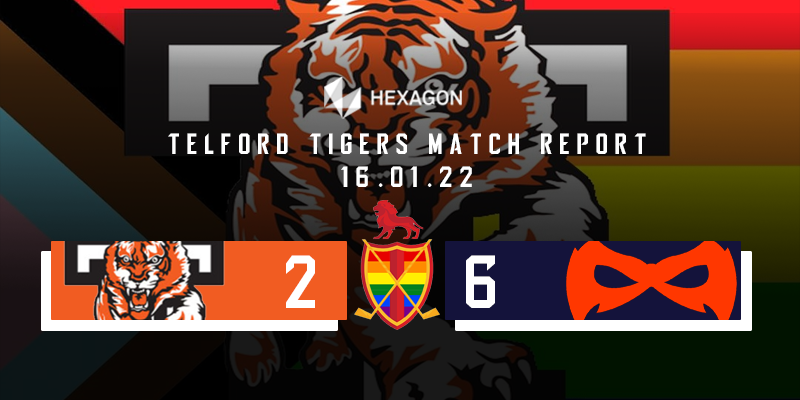 Tigers Hit For Six. Hexagon Telford Tigers returned to home ice after a disappointing end to their winning run of eight games with defeat away to Basingstoke the previous evening. Tigers were still without long term absentees Ricky Plant and Jack Watkins along with Corey Goodison and Jason Silverthorn. New signing Bayley Haywood was unable to play.

Tigers had lost the top spot in the league with the defeat to Basingstoke and Swindon’s victory over Sheffield.

Peterborough came into the game having beaten Bees 6-3 and started brightly with Corey McEwan forcing a pad save from Brad Day in the Tigers’ goal. Tigers’ Vladimir Luka hit two slap shots early on that just missed the Phantoms, goal.

Peterborough took the lead on the ninth minute with a long-range shot from Will Weldon beating Day who was screened by a Phantoms’ forward. Tigers fought back and equalised soon after. Ross Connolly sent a shot from the blue line past Jordan Marr in the Peterborough goal.

As the period entered the final minute, Tigers took the lead. Joe Aston battled brilliantly to win the puck on the Phantoms’ blue line and skated towards the goal then sent a perfect pass across to Brodie Jesson who fired low past Marr.

The second period was disastrous for Tigers with four Phantoms goals being scored and a shocked crowd unable to believe what they were seeing. Phantoms equalised early in the period. Glen Billing shot at Day who steered the puck to his left with his pads but just sent the puck onto the stick of Ales Padelek who tapped home. With Jesson serving a very soft slashing call, Phantoms took the lead. Duncan Speirs tapping home from Billings’ pass. Two minutes later Phantoms had a fourth goal. Billings tapping home unmarked at the back post. With Tigers reeling, Head Coach Tom Watkins called a timeout to settle the team down. But within a few minutes, Peterborough had a fifth goal. Billings got the final touch to a scramble in front of Day and steered the puck home for his second of the night. Tigers left the ice at the end of the period with a silent shell shocked crowd having seen the team concede four goals and with a mountain to climb.

Tigers pushed to get back in the game in the third period but with Peterborough looking to run out the clock, Tigers could not get past Marr and a late Thomas Norton goal sealed the victory for Peterborough sending Tigers to back-to-back defeats. The loss sees Swindon take a two-point lead at the top but Tigers have two games in hand on the Wiltshire team.

Man of the match: Nick Oliver.

After the game Head Coach Tom Watkins, commented, “This is a very competitive league and if you don’t play it to a certain level, you won’t have any success. I don’t want to dwell on a loss as the players have given us everything so far this season and compete hard every night. We had some mental errors and missed chances in the game. We move on and hope to have three forwards back next.”