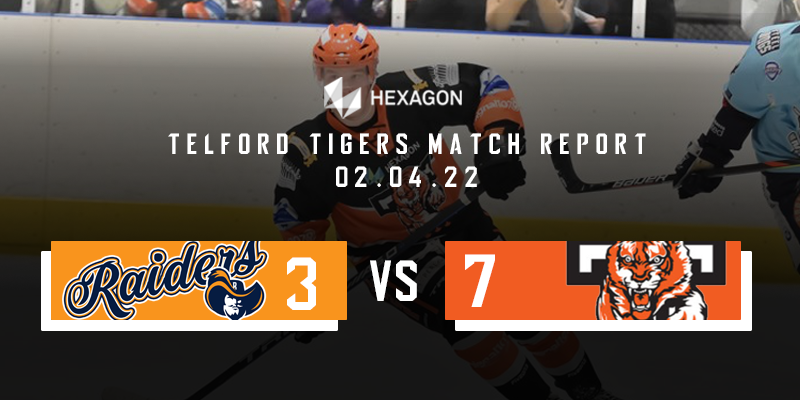 Tigers Hit Seven on their Final Road Trip. Hexagon Telford Tigers travelled to Romford for their final road game of the league season. Tigers had lost the National Cup Final in the week and with the title already secured, were playing for pride in a game that meant a great deal to the hosts who were desperately battling for the final playoff place with rivals Bees.

Tigers remained without Ross Connolly and Jack Hopkins.  Andy McKinney also sat out the game but Austin Mitchell-King returned to the lineup after missing the Cup Final. The only other addition was Lucas Price who made the step up from the Laidler championship-winning team.

Raiders started the first period very much in the ascendancy and opened the scoring after thirty seconds, Erik Piatak beating Brad Day with the first shot of the game. Tigers took a while to get going and were conceding too many penalties to allow them to get into the game. Finally, midway through the period, Telford equalised. Ricky Plant firing home from a Scott McKenzie pass. But as Tigers conceded in the opening minute of the period, they conceded in the final minute too. Aaron Connolly scored for Raiders twelve seconds from the buzzer.

The first half of the second period saw Raiders create more chances and have the better of the game. A penalty to Deakan Fielder saw Raiders get another power play and finally they cashed in on the extra man advantage with a goal from Brandon Ayliffe.

With Tigers losing 3-1 and effectively nothing to play for, it would have been understandable had the Raiders added to their tally. But, the rest of the game showed why this Telford team are champions.  Jonathan Weaver scored a trademark slap shot goal which was closely followed by a Fin Howells’ power-play goal to level the scores. The goal of the night was scored shortly after with a brilliant individual effort from Lucas Price to give Tigers their first lead of the game.

With Raiders desperate for points, they pushed for the equaliser but got caught out when Howells added his second of the night from a Mitchell-King pass. Tigers dominated the rest of the game and added late goals from McKenzie and Brodie Jesson to put a gloss on the scoreline.

Man of the match: Lucas Price.

After the game Head Coach Tom Watkins, commented, “Raiders had everything to play for tonight and came out very aggressively in the first period, they were very physical and jumped into a quick lead. We had to put our hard hats on at times and make sure we were ready to compete. One team was doing everything they could to grab a playoff place and you can see they were up for the game. We upped the intensity and slowly started to turn the screw. We scored some very well taken goals, moved the puck effectively and were efficient against their pressure.”