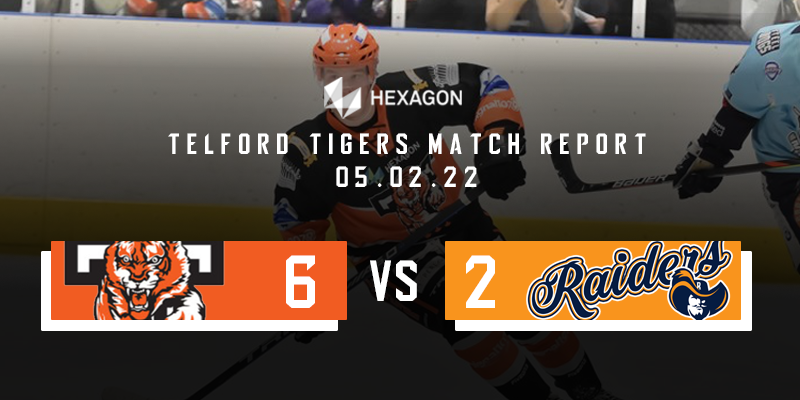 Tigers Hit Six to Stay Top. Hexagon Telford Tigers returned to home ice and league action with a game against Raiders. Tigers had returned to the top of the league last weekend but a midweek defeat saw their cup hopes hang in the balance after a disappointing 6-4 defeat to Milton Keynes in the first leg of the National Cup semi-final.

Swindon Wildcats had won against Basingstoke Bison the previous evening to draw level on points with Telford, albeit having played two games more than Tigers.

Thomas McKinnon, Jack Watkins and Sam Watkins were all still unavailable to play and were joined on the sidelines by Ross Connolly.

Raiders made a strong start to the game, dominated the opening stages and struck first in the third minute. A breakdown in the neutral zone allowed Jake Sylvester to find Erik Piatak who shot low past Brad Day to open the scoring. As the period progressed, Tigers improved and equalised. Vladimir Luka was clear on goal and was hooked by a Raiders’ defender as he was about to shoot and the officials awarded a penalty shot. Luka skated in on goal, slowed down and then sent a low shot past Michael Gray in the Raiders’ goal to draw the sides level. Shortly after, Telford took the lead. Nick Oliver sent a pass to Joe Aston on the Raiders’ blue line, Aston skated in on goal unopposed and sent a low shot along the ice past Gray. Day was needed on a couple of occasions to make saves, including a terrific point-blank save from Sylvester.

Telford made the perfect start to the second period scoring in the opening minute. A long-range shot from Jake Price caught out Gray and gave Tigers the third goal.  Midway through the game Tigers were caught with too many men on the ice and awarded a penalty. For the second consecutive game, Jason Silverthorn would score a short-handed goal. Scott McKenzie won the puck and battled with two Raiders’ defenders to get to the net. The puck broke to Silverthorn who tapped home for Tigers’ fourth goal.

Raiders scored a second goal late in the period with a huge slice of fortune. A puck was dumped into the Tigers’ defensive zone to allow Raiders to change lines but the puck bounced off the boards behind the goal and bounced towards the net, hitting Day’s skate and going into the goal. The goal was credited to Jacob Ranson who was the last Raiders’ player to touch the puck.

Tigers started the third period with an early goal to end any thoughts of a Raiders comeback. Jack Hopkins fought for the puck behind the goal and, despite being knocked to the ice, he managed to send the puck in front of the goal to McKenzie who tapped home. Fin Howells had the final say on the scoresheet with Tigers’ sixth goal. Corey Goodison sent a shot in on goal which rebounded off Gray’s pads and landed perfectly for Howells to score.

Tigers’ win coupled with Swindon’s defeat in Milton Keynes leaves Telford two points clear at the top of the league with two games in hand.

After the game Head Coach Tom Watkins, commented, “It was an important two points against a hardworking Raiders team who were dominant in the first period. We struggled to execute and exit transition situations and I felt we gave up a lot of shots but managed to win the period 2-1. We took a period to get going but I think the second period must have been one of the best this season – except for taking three back to back minor penalties, but the penalty kill tonight was solid.”