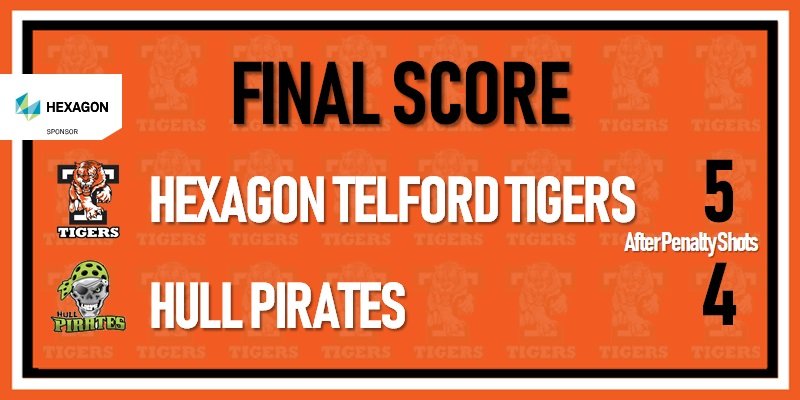 Tigers Hold Nerve in Shootout Win. Hexagon Telford Tigers 1 took on Hull Pirates on Sunday night at Telford Ice Rink. Tigers had surrendered the leadership of the league the previous evening after a disappointing 5-0 loss to Sheffield Steeldogs. Tigers were looking to bounce back against their former EPL opponents who came into the game having beaten the Steeldogs 3-2 the previous weekend to allow Tigers to go top of the league.

Tigers were without Dan Mitchell and Sam Gospel but were able to add Denis Bell to the lineup as back up net minder to starter Tom Hovell.

The first period was fast paced with both teams having plenty of chances. Jack Watkins had an early opportunity for Tigers but his shot from close range was blocked by Hull net minder Bradley Day. Hull had a great chance for a three on one break but poor passing let them down, allowing Jonathan Weaver to make a stick check and prevent a shot. Tigers then had two great opportunities, both Joe Aston and Jason Silverthorn went clear on goal but hit their shots straight at Day. Tigers conceded a goal in the 15th minute which had an element of deja vu from the opening goal against Sheffield the previous evening.  Hull’s Jason Hewitt hit a shot that was going wide but it hit the skate of Jack Watkins and landed in the perfect position for James Archer to shoot into the net past Hovell.  Tigers responded in the perfect fashion to going behind by equalising within a minute. Doug Clarkson collected a pass from Adam Taylor, outmuscled two Hull defenders and hammered a shot past Day that the net minder had no chance with. Tigers were then given a power play when Hull’s Aaron Lyon was called for roughing. A minute into the power play, Weaver found Clarkson in the left circle allowing Clarkson to hit a one time shot past Day to give Tigers the lead.  As the period entered the final minute, Tigers were again given a power play after Hull’s Kevin Phillips committed a tripping penalty. Tigers needed just nine seconds to score their third goal. Weaver’s shot was too powerful for Day to hold onto, leaving Scott McKenzie to fire the rebound into the net for Tigers’ third goal.

The second period started badly for Tigers with McKenzie taking a hooking penalty. Early in the power play Hull’s James Archer hit the cross bar with a wrist shot. Tigers’ luck didn’t last long though as Hull recycled the puck and found Sonny Karlsson who was unmarked in the left circle and shot into the net for Hull’s second goal. Former Tigers’ player Lubomir Korhon then had a breakaway chance to level the scores but shot wide. Tigers punished this miss with the next goal of the game. Andy McKinney showed great desire to win the puck at the side of the Hull goal and pass across to the unmarked Jack Watkins who tapped in Tigers’ fourth goal of the game.  The final goal of a thrilling period was scored by Hull in the thirty third minute. Poor defending by Tigers gave the puck away on their own blue line, leaving Korhon a free shot at the goal, this time he made no mistake with a low shot past Hovell. Tigers killed off consecutive penalties to end the period with the Tigers’ faithful getting frustrated by some of referee Matthews’ calls.

Just as Hull had scored early in the second period, they did so again in the third period when Korhon lead a two on one break away and passed to Lee Bonner who scored with a neat finish to tie the game. Both teams pushed hard for the winner, with Tigers going closest when Joe Hazeldine’s shot was tipped by Silverthorn onto the cross bar. Neither team could score in the remainder of the period meaning the game would go to sudden death overtime. In the five minute overtime period, both teams almost got the winning goal. James Chilcott went closest for Hull but was denied by Hovell. Weaver had the best chance for Tigers in the dying second of the overtime period after working a great opportunity with Silverthorn but Weaver’s shot was inches wide.

The game ended 4-4 after overtime, which resulted in penalty shots to decide the game. McKenzie scored first for Tigers with a wrist shot past Day. Bonner was then robbed by a terrific glove save by Hovell. Clarkson then missed for Tigers, followed by a miss from Hull’s Jason Hewitt. Silverthorn had a chance to win the game but his shot was saved by Day’s pads. Korhon took Hull’s last penalty shot and needed to score to extend the shoot out. He waited out Hovell and scored with a low shot, meaning the shoot out would be sudden death. McKenzie stepped up again and scored for Tigers with a terrific shot between the legs of Day. Karlsson went next for Hull and was denied by Hovell, winning the game for Tigers.

Tigers remain in second place in the league a point behind Sheffield with a game in hand.

Man of the match: Tom Hovell

After the game coach Tom Watkins commented, “I’m pleased to rebound with a win tonight after last night’s poor performance, although I thought we were very fortunate to take the win.

Hovy (Hovell) and Scott (McKenzie) were huge for us in the shootout and credit to those guys.

I felt we started well and played some good hockey in the first period, answering back quickly after Hull scored the first goal of the night was crucial for our belief.

After that we struggled to manage the puck, sustain offensive pressure and grind them down. Hull played two lines of forwards for nearly two periods and continued to play with energy and speed. We didn’t take advantage at all of this and couldn’t up our tempo, despite continuing to roll three lines for the rest of the night which was frustrating. A win is a win, but we need to improve, it’s a big let off for us!”