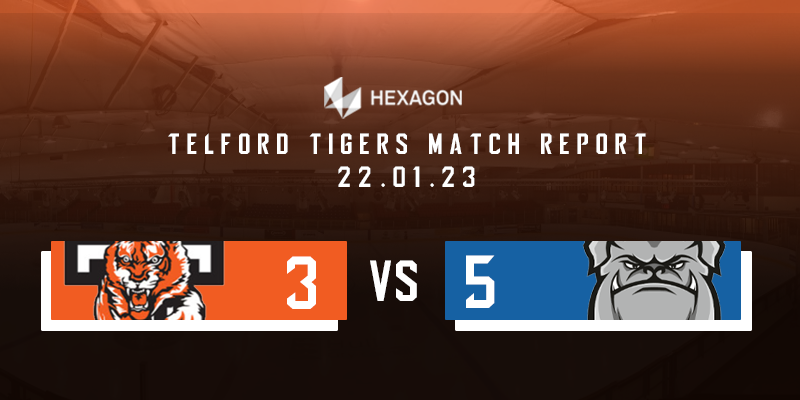 Tigers Improve but Suffer Another Home Defeat. Hexagon Telford Tigers returned to home ice after a terrific penalty shootout victory over Bees the previous evening. The home crowd were able to get their first glimpse of new import signing Rory Herrman who had scored a terrific goal on his debut for the team. Jonathan Weaver and Ricky Plant were still absent but Gareth O’Flaherty and Tom Carlon joined Herrman in making their first appearance in Telford for the team.

Games between the two team had been fractious in recent times and this game would prove to be no different.

Tigers started strongly and took the lead in the opening five minutes, Fin Howells’ shot from the right circle rebounded off Dimitri Zimozdra in the Sheffield goal and hit Scott McKenzie and flew past Zimozdra.  Shortly after Tigers had a second goal. Great work by Vladimir Luka kept the puck in the Sheffield zone and Luka’s shot was saved by Zimozdra but McKenzie was perfectly positioned to fire the rebound into the roof of the net for Tigers’ second goal.

Late in the period Sheffield pulled a goal back. Jason Hewitt tapping in after Tigers got caught on a breakaway.

Early in the second period Lee Bonner scored to equalise with a slap shot that gave Brad Day no chance.

As the second period progressed, Sheffield took the lead when Alex Graham shot in off the bar from in the slot with Day screened by his own defender.

Lee Haywood then tried to get Howells sent to the penalty box by feigning being injured and falling to the ice after being accidentally hit by Howells’ stick. Shortly after Zimozdra got in on the act when Carlon skated past him and made contact with the Sheffield net minder who threw himself to the ice but no penalty was called.

Sheffield’s theatrics did them no good as shortly after Brodie Jesson equalised. Gareth O’Flaherty brilliantly found Jesson in space allowing the Tigers’ forward to smash a shot over Zimozdra’s glove and into the net.

With the sides level at the start of the third period the next goal would prove crucial. Sheffield went close a couple of times and Day was called on several times to prevent breakaways.

The pressure on the Tigers’ goal finally paid off when Graham tapped in from close range with five minutes of the game left. Tigers were annoyed at a none call on Luka in the build up to the goal as it appeared that Luka had been slashed by a Sheffield defender but referee Williams ignored it and allowed play to continue.

With time running out Tigers pulled Day from goal to add an extra attacker but despite some pressure on Zimozdra’s goal, a blocked shot by Sheffield allowed the puck to break out of the offensive zone and gave Graham an empty net to complete his hat trick.

Tigers can feel hard done to, as a spirited performance saw them end up without any points and another home defeat.

After the game Head Coach, Tom Watkins, commented, “We got a great start which got the fans into the game and the atmosphere was something we haven’t heard for a while. It was felt on the bench and created a lot of energy.

Unfortunately, not the result we wanted but it was another gritty performance. The work ethic is there, the commitment is there but we need to iron out some errors in areas where we can improve like our puck management and decision making. We gave up too many odd man rushes and turned a few pucks over but we are working hard to improve every night and are getting better as a team. The three new players give us a chance to be competitive and are a very welcome addition to the group. “