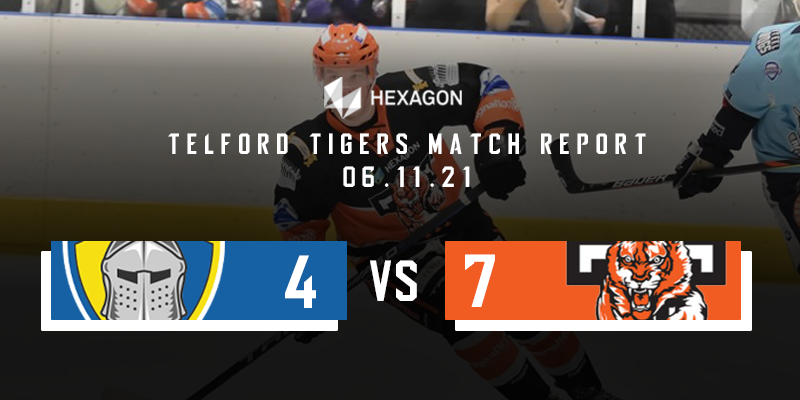 Tigers in Seventh Heaven. Hexagon Telford Tigers travelled to Yorkshire to take on the Leeds Knights. Tigers had won their previous four games and Leeds had struggled for form of late, having lost three in a row since losing star netminder Sam Gospel through injury. The Knights played back up Tyler Perre in goal and Tigers started Jordan Lawday for his second consecutive game. Tigers welcomed back key defenseman Jonathan Weaver but were missing Jack Hopkins and Ross Connolly.

A fairly uneventful first period saw both sides get onto the scoresheet. Tigers took the lead with a well-worked goal, Ricky Plant finding Jason Silverthorn in space and the Tigers’ captain rifled a shot past Perre to give Tigers the lead. Leeds responded, however,  within two minutes, Kieran Brown scored to draw the sides level.

Tigers regained the lead early in the second period with the top line of Scott McKenzie, Plant and Silverthorn combining to leave McKenzie with a wrist shot which beat Perre. Leeds once again hit back to level the game. With less than two minutes of the period to play, Brandon Whistle scored to send the sides into the break level at 2-2.

The third period proved to be full of goals and Tigers led the way early on with a goal 16 seconds into the period, Silverthorn scoring his second of the night and just 24 seconds later, Tigers had added a fourth goal. Silverthorn buried a wrist shot past Perre to complete his hat trick and put Tigers in control of the game. Leeds never gave up and pulled a goal back two minutes later with Whistle scoring his second of the night. Tigers reacted by getting their fifth goal. Ricky Plant scored to restore the two-goal lead. Closely followed by a sixth goal, with Joe Aston finding the net to continue his current goal scoring form. Leeds were forced to call a time out to slow the game down and try to stem the flow of goals but the respite was only temporary as Tigers scored a further goal through Aston, his second of the night. A Leeds consolation goal in the dying seconds from Whistle saw Leeds add some respectability to the scoreline but it didn’t dampen the spirits of the large contingent of Tigers’ fans who had travelled to Yorkshire and went home delighted with the victory.

After the game, Head Coach Tom Watkins, commented, “I’m very pleased to pick up the win tonight in front of great travelling support who were very loud all night. That support is appreciated by the boys and it would be great to hear that noise back at home tomorrow. Leeds came out hard and created a lot of good chances in the first period but we got better as the game went on and I thought we were very strong through the second and third periods. Defensively stronger, exited the zone with speed and looked good on the rush and forecheck. I’m looking forward to our next game, for sure it will be another tough one.”