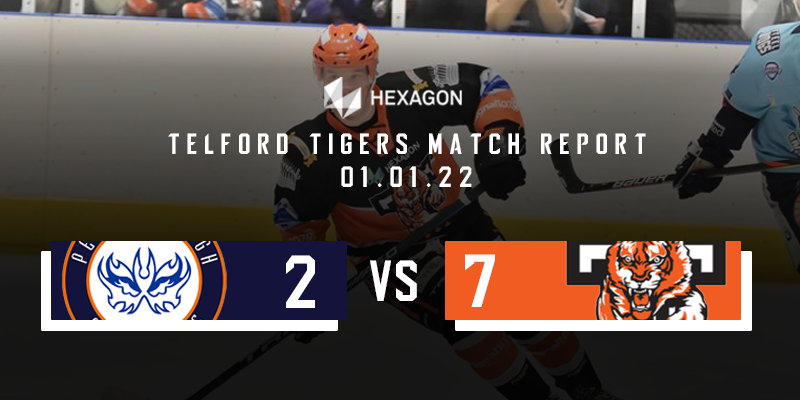 Tigers in Seventh Heaven. Hexagon Telford Tigers travelled to Peterborough for the opening game of 2022 to take on the Phantoms. Tigers had won their last four games to close the gap on leaders Swindon to two points. With Swindon losing at home to Bracknell earlier in the day, Tigers had the chance to go level on points at the top of the league.

Tigers were still not back to full strength as Andy McKinney was still serving a ban and Ricky Plant and Jack Watkins were out injured. They were joined on the sidelines by Corey Goodison, Thomas McKinnon, and Jonathan Weaver. Head Coach Tom Watkins was also unavailable to travel for the game, leaving Assistant Coaches Barry Holyhead and Steve Molineux in charge. Tigers added Charlie Webb and Thomas Byrne to the squad – both players stepping up from the Tigers 2 squad.

Peterborough found themselves in a similar position, missing a number of key players for the game.

With so many changes for both teams, it was no surprise that the opening period was a scrappy affair. The ice surface in Peterborough was not helping either team play fluid hockey. Tigers opened the scoring in the sixth minute with Joe Aston setting up Brodie Jesson in front of goal. Jesson hit a superb wrist shot past Jordan Marr in the Phantoms’ goal, beating him high up with a precise shot. Tigers and Jesson doubled their tally five minutes later. Aston and Sam Watkins combined to find Jesson unmarked in the slot. Jesson sent a terrific wrist shot past Marr to give Tigers a two-goal lead. Brad Day was called on shortly after to make a save from a Glenn Billing breakaway chance. Tigers put the gloss on the period with a third goal with just one minute to go. Fin Howells and Jason Silverthorn combined to send Austin Mitchell-King in on goal. Mitchell-King shot high past Marr to send Tigers into the break three goals ahead.

Mitchell-King hit the post early in the second period and Fin Howells went close with a shot from close range that he lifted over the goal when well placed. Tigers left it late in the period but scored twice in the last three minutes to continue their dominance. The puck broke to Silverthorn and the Tigers’ captain shot into the top left-hand corner of Marr’s goal with a wrist shot that gave the Phantoms’ netminder no chance. Within a minute, Tigers had a fifth goal and Jesson his third of the game. Jesson took control of the puck at centre ice, skated in on goal and cooly backhanded the puck to Marr’s left to complete his hat trick.

Peterborough changed their netminder at the start of the third period with Ryan Bainborough replacing Marr in goal.  Tigers added a sixth goal early in the third period. Vladimir Luka sent a pass across goal to Scott McKenzie who deflected the puck past Bainborough.  Peterborough finally got on the score sheet with a goal from Duncan Speirs but Tigers hit back with a seventh goal, Luka finishing off a pass from Jack Hopkins at close range.

With the game heading into the final five minutes, Tigers replaced Day in goal with Matthew Bloor to give the young netminder some time on the ice.

In the dying seconds of the game Peterborough scored a further consolation goal with Tom Norton tapping home to give Peterborough a second goal.

Tigers’ win sends them joint top of the table with Swindon and Tigers have the advantage of a game in hand.

After the game Tigers’ Assistant Coach Barry Holyhead, commented, “It was a good road performance as it’s always hard to play in Peterborough, both teams had a number of key players missing but the players brought in to chipping the puck out of our zone and into theirs to limit any turnovers. I think we controlled most of the game and deserved the win. It was nice to be up by a few goals, so we could get the three young players on and give them some ice time.”