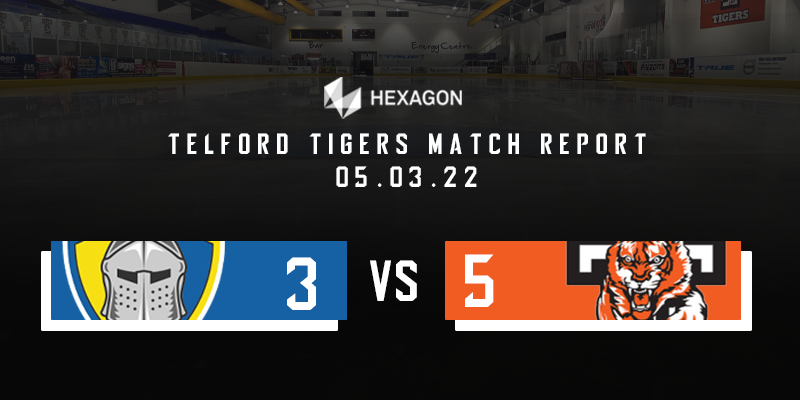 Tigers Increase Lead with Road Win. Hexagon Telford Tigers travelled to Leeds for their final visit of the league season to the Knights’ home rink. Tigers lost their last visit to Leeds and were coming into the game after one of their poorest performances of the season – a defeat to bottom club Bees.

An overnight defeat for nearest rivals Swindon left Tigers with an opportunity to add to their five-point lead at the top of the table.

Telford were still without Ross Connolly and Jack Watkins and Fin Howells was also unavailable.

Tigers made the worst possible start to the game with Kieron Brown scoring for Leeds with the first shot of the game after just twenty-eight seconds. With the team reeling from the poor start it took a few minutes to recover and, after five minutes, the teams were level. Scott McKenzie set up Vladimir Luka who fired a low shot past Sam Gospel in the Leeds’ goal. Tigers struck next three minutes later, Bayley Harewood beating Gospel with a well-placed wrist shot.

Telford continued their dominance with two quick goals to take control of the game. Austin Mitchell-King struck a power-play goal after Brown was awarded a cross-checking penalty. Then thirty seconds later, Luka added his second goal of the period. With Leeds in trouble, they called a time out, which slowed the game down allowing them to recover their poise and get back into the game shortly after with a Lewis Baldwin goal. Tigers ended the period 4-2 ahead.

Midway through the second period, Tigers had a fifth goal. Luka scored his hat trick goal with a fierce shot that gave Gospel no chance. Leeds hit back with a goal from Cole Shudra to reduce the lead to two.

Leeds pushed hard for a goal that would get them back into the contest but Telford defended superbly in the third period, limiting any chances for the Knights and sensibly running down the clock to seal a terrific win on the road.

Swindon’s second defeat of the weekend coupled with the Tigers’ victory has left the league leaders with a seven-point gap and a game in hand ahead of the next game at home against Peterborough.

After the game Head Coach Tom Watkins, commented, “It was a very important bounce-back game for us tonight on the road and in a tough building. We got everything right and I thought we executed everything well and to a high standard. We moved the lines around in the week which makes us better defensively and gives us more balance in all situations.  I think tonight was our best third period this season. Overall we played solid for three periods led by our captain, Jason Silverthorn who was outstanding.”