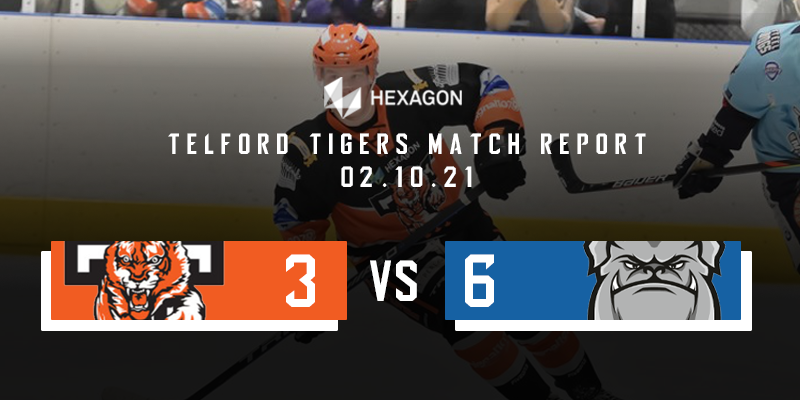 Late Collapse. Hexagon Telford Tigers returned to home ice to take on the Sheffield Steeldogs. Ahead of play, Sheffield had a 100 percent record in the competition having won all three of their previous games and sat as joint leaders of the group table.

Tigers were dealt an injury blow ahead of the face-off with forward Scott McKenzie unable to ice, a change which saw Sam Watkins take McKenzie’s place centring the second line.

The game started slowly for both teams and there were no real chances of note within the first ten minutes of the game.  Sheffield lost the services of Tim Smith in the 12th minute after the Steeldogs player took a puck to the body, leaving him down on the ice in agony. After a short delay, he received attention and was then helped from the ice by his teammates.

Tigers scored the only goal of the period in the 17th minute. A Tigers’ attack had broken down just inside the Sheffield defensive zone but Ricky Plant just managed to get a touch on the puck and deflect it back towards the blue line. Jonathan Weaver skated towards it and unleashed an unstoppable slap shot past the Sheffield netminder Dimitri Zimozdra to give Tigers the lead. Late in the period, a hit by Ross Connolly upset the Sheffield bench with the Steeldogs’ Lee Bonner going after Connolly and both dropped the gloves, with Connolly the clear winner.

A minute into the second period, Tigers doubled their lead. Terrific play by Plant sent Jason Silverthorn through on goal. The Tigers’ captain skated in on Zimozdra and sent the puck into the net with a backhanded shot.  Sheffield struck back on their first power play of the game. Deakan Fielder was in the penalty box for cross-checking when Jason Hewitt’s initial shot went well wide of the Tigers’ goal but a fortuitous bounce off the backboards gave Nathan Salam a tap in putting the Steeldogs on the scoresheet.  Tigers fought back and restored their two-goal lead.  Jonathan Weaver led a rush up the ice and sent a perfect pass through to Andy McKinney who skated in on goal and sent the puck high past Zimozdra’s glove into the top left-hand corner of the goal.  The final goal of a very competitive period went to Sheffield. Tigers got caught out up the ice and Bonner was able to skate unchallenged into the Tigers’ offensive zone and sent the puck past Day to leave the game finely balanced going into the final period.

Sheffield pushed for the equaliser and as the game entered the last 10 minutes they drew level. A shot from James Spurr looked harmless but it bounced off Day’s chest and rolled behind him into the net. Tigers seemed to have run out of steam and conceded again shortly after with Day caught out of position and unable to stop Charlie Thompson’s shot. Sheffield then struck again to move 5-3 ahead. Hewitt scoring from close range with Day unable to stop the puck from crossing the goal line.  Tigers pulled Day from the goal to add an extra attacker but could not create any chances. There was still time for an astonishing miss from Salam, with the ex-Tigers’ player hitting the puck against the crossbar from within the goal crease with the net empty. However, this was a temporary reprieve as Bonner scored shortly after into the empty net to seal a 6-3 win for Sheffield and severely dent Tigers’ hopes of making the semi-finals.

After the game Head Coach Tom Watkins, commented, “We let that slip and that angers me. Sheffield didn’t have to outperform us to win that game but took advantage of our game which deteriorated as the night went on. It is very frustrating. We conceded 5 unanswered goals and I’m not sure when that’s happened before. We got ourselves in a great position, played physical with grit but after conceding the first goal we tightened up. Mentally we have to be tougher and have to be more resilient. We effectively gave the game away.”