Tigers Late Equaliser is Taylor made. 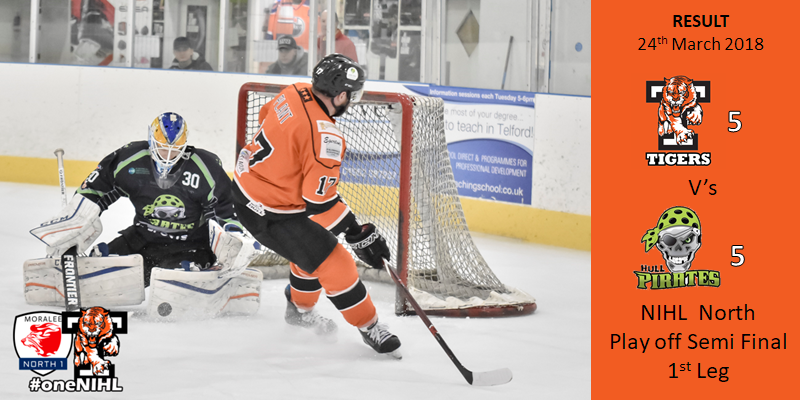 Telford Tigers 1 took on Hull Pirates in the first leg of the NIHL North Playoff semi final at Telford Ice Rink on Saturday night. Tigers had qualified for the semi final by beating Whitley Warriors and Hull had beaten Blackburn Hawks. The teams had finished 2nd and 3rd in the league respectively and the league games between the two teams had resulted in each team winning one home and one away game.

Tigers went into the game without Dale White, Nick Oliver and the U18 players: Jed Moreland, Brodie Jesson and Dan Mitchell. Jordan Stokes made his first appearance since February.

Tigers came out of the block slowly in the first 10 minutes of the game and paid a heavy price. Hull scored in the 3rd minute when James Archer finished well with a wrist shot into the top corner. Tigers fell further behind in the 9th minute when Bobby Chamberlain tapped in at the far post. Things got worse in the 10th minute when Tigers failed to clear their zone and were punished when Jason Hewitt scored. Tigers coach Tom Watkins called a time out to rally the troops, which seemed to reinvigorate the team but despite the period ending with Tigers on the front foot, they could not score.

The 2nd period started as the 1st period had started with Hull almost scoring straight away when Hewitt’s wrist shot went over the goal from close range. Adam Jones then took exception to a slash from Lee Bonner and sent him flying to the ice with a hard hit. Chamberlain and Jones then had a bout of wrestling with both ending up on the ice and then sent to the penalty box.

Tigers finally got on the scoresheet in the 29th minute whilst on the power play. Captain Jason Silverthorn firing his wrist shot through the legs of Hull net minder Ashley Smith to cut the lead to 3-1. Just as it seemed Tigers were back in the game, Hull broke away and scored their 4th goal. Hewitt scored after his initial shot was saved by Denis Bell in the Tigers goal but he got to the rebound first and fired home.  Tigers responded shortly after with their 2nd goal. Macauley Halford brilliantly kept control of the puck in his own zone and battled his way past three Hull players to make a pass to Silverthorn, who made no mistake with a shot past Smith.  In the 37th minute Tigers got a 3rd goal, Ricky Plant tapping home at the far post after a scramble in front of the Hull net. Tigers spent the remainder of the period firing shots at the Hull goal but couldn’t get the equaliser.

The final period began with Adam Taylor having a great chance to tie the game but Smith made a good save to deny him. Hull then had a goal disallowed. Referee Brooks ruling the puck had been hit into the goal with a high stick. Taylor broke away and hit a shot that rang off the cross bar.

Halford then took an unnecessary elbowing penalty which Hull took full advantage of, scoring through Jonathan Kirk to increase their lead to 5-3. Scott McKenzie had a great chance to score after Smith lost the puck behind his net but he managed to scramble back and deflect the shot off the line.

As the game entered the final 5 minutes, Hull’s Chamberlain took a cross checking penalty. Tigers took just 10 seconds to score on the subsequent power play, Jonathan Weaver blasting a powerful slap shot from the blue line that flew into the net.

Tigers levelled the tie in the 57th minute with the best goal of the night. Taylor used his speed to break away from two Hull defenders and coolly back handed the puck past Smith to the delight of the home crowd. Tigers finished the game with a power play and had a number of shots that went agonisingly wide of the net, leaving the game level at the end of the 1st leg.

After the game coach Tom Watkins said, “ It was an awful start. We gifted them goals and they didn’t have to work for anything they got. We made individual errors that cost us. That said, we were still making chances and at the end of the first period and I think it was really important not to panic, there were still five periods to play so plenty of time to chip way at the deficit and ask everyone to make a difference.  Watkins added, “The energy, commitment and desire we showed in that middle period has given us a great opportunity.  We have to show more hunger from the get go and if we can play with that energy in the 2nd leg I’ll be happy.

It was great to feel the crowd go from despondency to them getting right behind us and creating some energy for the team.”