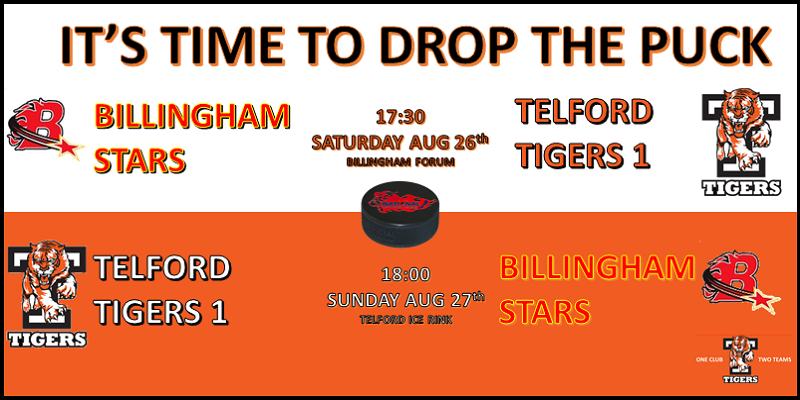 Telford Tigers 1 will open their NIHL North 1 Moralee Conference season on Saturday the 26th August at 17:30 with a couple of pre season friendly fixtures, first a road trip to face Billingham Stars in County Durham, with a return fixture against Billingham at Telford Ice Rink on the following evening, Sunday the 27th August at 18:00.

Billingham is a familiar name to those who have followed the NIHL previously but could be a new name for those fans who had only followed the EPL Telford Tigers.  The Billingham Stars play their home games in the town of Billingham, in the borough of Stockton-on-Tees in County Durham.

Billingham finished 2nd in last years Moralee Conference and have added a few new faces for this season including two Latvian imports.

The game will see a quick return for Jack Watkins to his old team and will reunite a number of players with Billingham recruit Callum Pattison who has signed from Sheffield Steeldogs.

Head coach Tom Watkins said “It will be good for me personally to head back up to the North East and play the Stars. It’s always fun to kick off a new season and for us to get back in the groove against new players, new teams and create new rivalries. Playing a team back to back always adds a little spice and when the competitive juices get flowing I’m sure we will be in for some exciting hockey.”

Tickets will go on sale soon and will be announced on the website and social media channels.