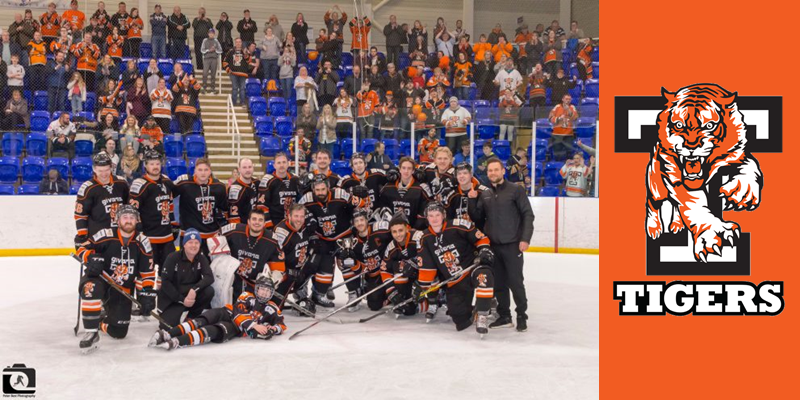 Telford Tigers Head Coach Tom Watkins is hoping it will be third time lucky for his side when they travel to Coventry for the end-of-season play-off finals this weekend.

The Shropshire outfit has twice fallen at the final hurdle in recent seasons, losing to Peterborough in the semi-final in 2015 and then in the final against Milton Keynes last year.

Telford once again face Peterborough Phantoms in Saturday afternoon’s final-four encounter, with the winner playing either Sheffield or Basingstoke in Sunday’s showpiece final.

And following a year of changes that saw the EPL disband and teams join the NIHL, Watkins is looking forward to ending the season on a high.

He said: “It’s a horrible feeling coming away empty handed, as we’ve been beaten in the semi finals and lost the final last season.

“I think in the past we’ve come here as favourites after walking away with the league, but I’m not sure that’s the case this year. We have to play disciplined desperate hockey to have a chance to win.

“This will be the club’s third appearance at the playoff finals in four seasons and yes, we’re desperate to have post-season success.

“I certainly think for the players that have been here before they are more driven than previous seasons but who isn’t excited to play in the playoff finals?”

But Watkins is cautious of placing too much emphasis on that result at the two-day end-of-season tournament.

He added: “I’m not sure there is any momentum to take from last weekend. We played very well last Saturday, but then played with to much complacency the following day and soon fell behind 3-0.

“I think this weekend is totally separate and whoever plays the best hockey across the weekend will be successful, goaltending and special teams will most likely be difference.”

Saturday’s clash with Peterborough will be the first meeting of the two sides this season, following league changes that saw Telford placed in a different geographical conference.

The Telford boss has, however, been able to draw on past experience of games against the East Midlands side.

“We haven’t faced one another this season, so of course we don’t have any knowledge of playing them this year,” Watkins said.

“I’ve been able to watch some video though, and we have plenty of experience from past games from playing them.

“They have a lot of returning guys from last season, Slava has his team well organised and they have some guys that are game changers.

“I’ve tried to make more of our focus on our execution to allow us to play direct.”