Tigers “Lord it” over Defensive Signing 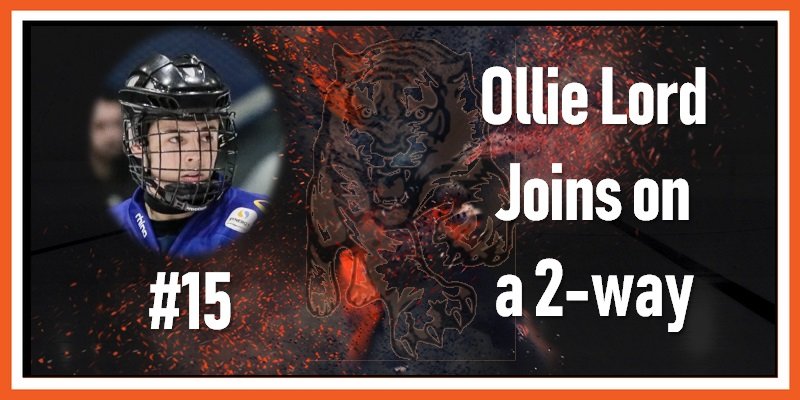 Tigers “Lord it” over Defensive Signing.  Telford Tigers are pleased to announce the signing of 18 year old Coventry Blaze defenseman Ollie Lord on a two way deal for the 2019/20 season.
The deal will see Lord spend most of his playing time with Tom Watkins’ Telford Tigers but his development will be aided by training full-time with the Blaze Elite League squad. He will be available for selection by Coventry Head Coach Danny Stewart where possible. Lord will wear the number 15 shirt for Tigers.

Lord, a product of the Blaze Academy System, appeared in two Elite League games last season, also taking part in the club’s pre-season training camp. In addition to 10 games with Milton Keynes Thunder in the NIHL last year, Lord iced for the Blaze’s NIHL 2 side, being named in the first All-Star team. He has also won numerous national championships with the Blaze at all junior levels from under-16 upwards.

Coventry boss Stewart said, “Having Ollie train with us full-time and playing games at a slightly better level than he has before is exactly what he needs. He still needs some time to mature and learn before he is Elite League ready and training at this level helps get him there. Playing in Telford for a good club and coach will help with his progress and allows him to play those game minutes rather than sitting on the bench. He has lots of raw talent and the right mindset. He may be a year or two away from being ready for this level, but he is certainly taking the right strides to get there.”

Lord commented, “I am pleased to be joining Telford on a two way deal and look forward to getting to meet the rest of the team when pre-season training starts. I hope to be competing for silverware in the new league and know that this move will aid my development as a hockey player.”

Tom Watkins, Head Coach and General Manager, said, “I am pleased to add Ollie to the roster for the forthcoming season. I’d like to thank Coventry for allowing Ollie to join us and hopefully we will all benefit from the deal. Ollie will get regular ice time here and a chance to develop his game and go back to Coventry a better player.”

Ollie’s own and loan shirts are available to order now for £100 each (Home and Away). Please see the Tigers’ Online Shop for details.

In the 2019/20 season, Tigers are again offering individual player sponsorship at £400. The package will include a personalised ‘SPECIAL’ exclusive third jersey with a company name or family name patch, announcements on match nights, a small advert or logo in the match night programmes and a signed player photo. The jersey will be worn for cup games and play-off games and will not be available as a replica.

If you are interested or require more information on the individual player sponsorships, contact [email protected].
Watch out for further details about new signings at Telford Tigers, visit: https://www.telfordtigers.net/news or catch up on Facebook or Twitter