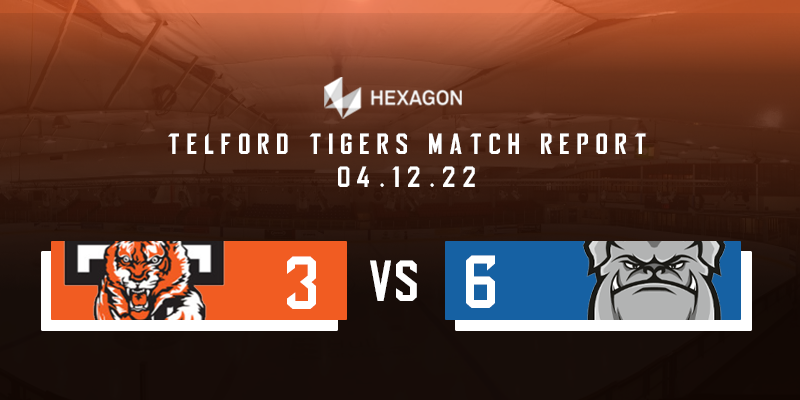 Tigers Lose That Winning Feeling. Hexagon Telford Tigers faced off against Sheffield Steeldogs on Sunday evening looking to end their recent poor run of form having lost their last four games including a deflating defeat in Basingstoke the previous evening.

Tigers have had a bad habit of conceding first in games this season and this bad habit continued when Jordan Buesa opened the scoring for Sheffield early in the first period.

Telford hit back straight away with a goal from Jack Watkins to level the score.

At the start of the second period Sheffield were awarded a penalty shot which was dispatched by Lee Bonner to put Sheffield back in front.

Once again Telford hit straight back with top scorer Vladimir Luka applying the finish to a Jason Silverthorn pass. Sheffield regained the lead within three minutes when Alex Graham shot low past Brad Day to score.

Steeldogs then took the game away from Tigers with goals from Jonathan Kirk on the power play and Bonner’s second of the game to leave Telford reeling.

A disappointing night got worse for Tigers as Scott McKenzie was awarded a game penalty for fighting in the final minute of the game meaning the Tigers’ forward could be suspended next weekend.

Tigers slumped to a fifth consecutive defeat and need to bounce back next week.

Man of the match: Sam Watkins

After the game Head Coach Tom Watkins, commented, “It was another tough night for us as a team. You won’t win many games giving up six goals at home. Defensively we weren’t good enough. We simply can’t defend at the moment, no matter what we do and even when we get positives or momentum going our way, we kick ourselves in the backside by continually making the same errors. This is a big challenge for us to overcome as a team and these are the times you need the fans behind you. It’s easy to support a winning team but it’s when a team is struggling you see the people who really care. Right now we have to embrace the challenge as a team and as a fan base.”