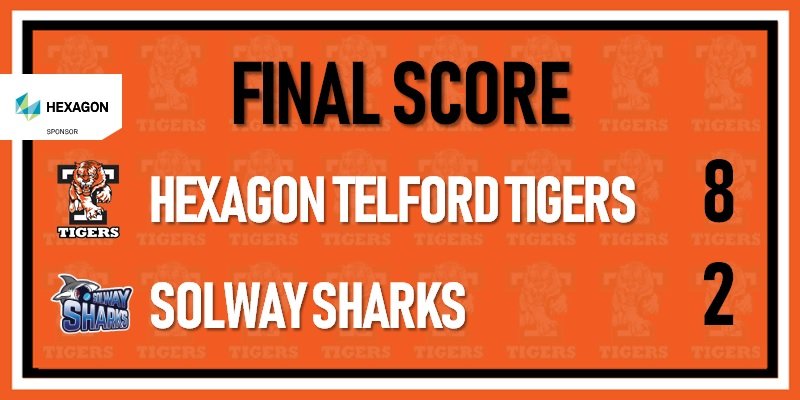 Tigers Maintain Top Spot with Solway Win. Hexagon Telford Tigers 1 took on Solway Sharks in the league for the final time this season, on Sunday night at Telford Ice Rink. Tigers had maintained top spot in the league the previous evening with a hard fought 7-2 win over Billingham Stars. Tigers’ Andy McKinney registering a hat trick in the second period to put Tigers firmly in control of the game after a shaky start.

Solway have certainly proved a difficult team to beat this season and the two recent contests between the teams have shown what a fast and skilful team they are, especially by winning in Telford 4-3 in their previous meeting in the North Cup semi-final. However, Tigers had won all three previous league meetings between the teams.

Tigers were still without Dan Mitchell and Corey Goodison but had welcomed back Joe Hazeldine the previous evening and were able to add Jed Moreland and Fin Howells to the line up. Starting in goal for Tigers was Tom Hovell and in goal for Solway was Calum Hepburn.

Tigers started the game well and early in the first minute, Doug Clarkson had a good chance but hit his shot straight at Hepburn. Ricky Plant then grazed the net with a shot as Tigers went closer to the opening goal. The goal arrived in the 9th minute when a terrific move between Clarkson, Adam Taylor and Andy McKinney was finished off by McKinney with a low shot past Henderson. Tigers were dominating the period and added a second goal in the 13th minute after Clarkson showed terrific stick handling skills to create space for a shot, allowing McKinney to score off the rebound. Tigers ended the period firmly in control when in the final minute, Scott McKenzie scored a third goal. Plant found McKenzie unmarked in front of goal. McKenzie’s shot went through Hepburn and trickled across the line. A Solway defender cleared the puck a second too late and initially Referee Hand ruled out the goal, but after consulting the goal judge, awarded the goal to give Tigers a 3-0 lead at the break.

Tigers were not at their fluid best in the second period and got caught out in the 34th minute when Joe Coulter sent Cale Tanaka clear on a break away. Tanaka scored with a shot low down past Hovell to reduce Tigers’ lead. Just forty seconds later, however, Tigers restored their three goal lead when McKinney’s pass found Adam Taylor in front of goal, Taylor applied the finish with a back handed shot into the bottom corner past the sprawling Hepburn. Solway responded with their second goal minutes later, when Peter Gapa faked a pass and instead shot into the top corner of the goal with Hovell caught out moving across goal and leaving space on the near post for the puck. Tigers ended the period 4-2 ahead.

Tigers started the third period in perfect fashion with a goal from Clarkson who was left wide open in front of the goal and scored with a wrist shot. Three minutes later, the game was over as a contest when McKenzie and Jason Silverthorn led a two-on-one breakaway, with McKenzie’s shot being too strong for Hepburn as it went through him into the net for Tigers’ sixth goal.  Tigers closed out the contest with two further goals. First Plant got the goal his performance deserved when he scored from McKenzie’s pass, then Brodie Jesson scored off a rebound from Jordan Stoke’s shot. Tigers’ win keeps them top of the table, a point ahead of second place Sheffield Steeldogs with a huge weekend double header against third placed Hull Pirates next week.

After the game coach Tom Watkins commented, “We really tried to play with an increased sense of purpose and energy tonight. We watched a lot of video prior to today’s game to highlight some areas I felt we needed to improve. Last weekend I felt we were far too passive but tonight we played with lots of energy and dictated most of the play. We created several goals from stripping pucks on our back pressure, turning pucks over on our controlled fore check and had an overall desire and work rate which were much improved.”   Watkins added, “We’ve got 11 games to go and are competing for two pieces of silverware. We are currently in first place in the league and dominated a team that turned us over last week. The atmosphere in the building tonight was flat, we need to feed off the energy of the fans, there is nothing better for the players when the rink is loud and rocking. We need to get as much support as we can for the run in.”

Hexagon Telford Tigers 1 return to play at Telford Ice Rink Saturday 16th February 2019 at 19:00 in the NIHL Moralee Conference against Solway Sharks. Hexagon Telford Tigers 2 are next in home action at Telford Ice Rink on Sunday 24th February 2019 at 18:00 in the NIHL Laidler Conference against Blackburn Hawks 2. For details of all future fixtures, check out the Tigers fixture list and www.telfordtigers.net/tickets for ticket information.