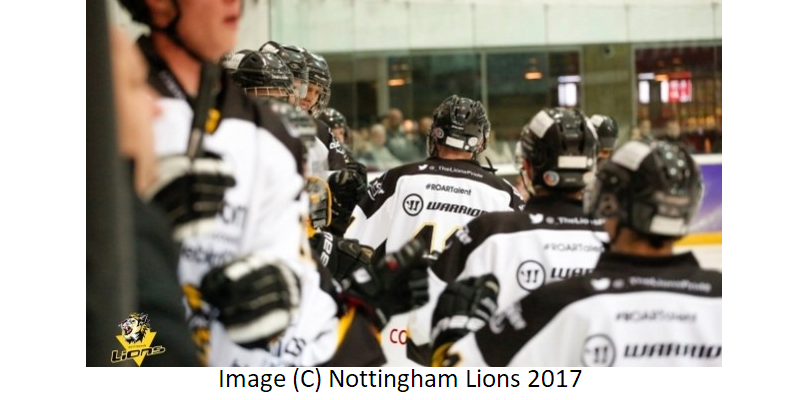 Telford Tigers 1 followed on from their opening night penalty shoot out win over Sheffield Steeldogs with a victory over hosts Nottingham Lions at the Nottingham Arena to achieve a four point weekend and top the table after the first weekend of fixtures.

Tigers dominated the the first period but it wasn’t until the eighth minute that they opened the scoring. Jason Silverthorn received a perfect cross ice pass from Joe Miller to go one on one with the Nottingham net minder Thomas Hovell, Silverthorn deked and then fired home low into the net. Tigers’ scored again in the eleventh minute when Ricky Plant played a great pass to Miller who one timed the puck from inside the hash marks in off the post.  Tigers’ continued to dominate but it was Nottingham that scored next with Paul Stanley’s shot on the breakaway trickling in after Sam Hewitt appeared to have saved the shot. Tigers powered forward and came close when Dale White struck the bar with a powerful slap shot.

Tigers continued their dominance in the second period and finally got the third goal. Terrific battling by Jonathan Weaver kept the puck in the offensive zone and a shot saved by Hovell led to a goalmouth scramble, with Macauley Halford firing home whilst the net minder was down in his crease. Tigers added a fourth in the final minute of the period when Miller combined with Silverthorn for the captain to score with a fierce shot into the top right hand corner.

The third period continued in the same vein as the previous two, with Tigers on top but not getting the goals they deserved. It was Nottingham that scored next, taking advantage of a five on three power play with Miller and Adam Taylor in the penalty box, to score through Richard Slater reducing Tigers’ lead to 4-2.

Jonathan Weaver had the last say in the final minute of the game, when he scored a power play goal with a shot from the top of the circle to seal the win. Tigers reached 59 shots on goal with Weavers’ strike and but for the good play of Hovell, the scoreline would have been more one sided.

Man of the match – Adam Taylor.