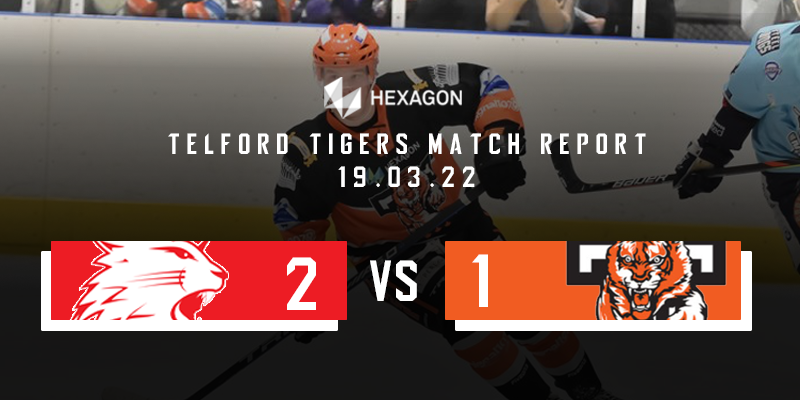 Tigers miss chance to secure the title. Hexagon Telford Tigers travelled to Swindon with an opportunity to win the NIHL National Division title. With second-placed Swindon trailing Tigers by nine points, a victory for the Shropshire side would give Telford their second consecutive league title. Tigers came into the game off the back of a draining defeat to Sheffield Steeldogs in the first leg of the National Cup Final.

Tigers remained without the services of Ross Connolly and Jack Watkins but welcomed back Danny Rose who missed the defeat to Sheffield.

Swindon started the game much better than Telford and opened the scoring in the fifth minute. Reed Sayers sent Jack Goodchild clear on goal to beat Brad Day. With Swindon having constant pressure on the Tigers’ goal, Day had to be at his best to keep the Wildcats out.

Tigers were much better in the second period and finally got on the scoresheet in the twenty-fifth minute. Corey Goodison sent a long pass to Austin Mitchell-King who skated in on goal and beat Renny Marr with a neat finish to halve the deficit.

Tigers pushed hard throughout the third period to get the equaliser but despite their valiant efforts, they could not beat Marr and slipped to defeat. With the victory, Swindon cut the lead at the top to seven points, leaving Telford needing two more wins to secure the title or a victory in their next game and a Swindon defeat to Bees.

After the game Head Coach Tom Watkins, commented, “The game saw two good teams going head to head for 60 minutes. We didn’t get the best start, falling two goals behind in the first period but we grew into the game and in the second period established ourselves much more and were a threat throughout. In the third period, Swindon did an excellent job of making it very difficult to get pucks to the net, they were blocking shots with sticks and bodies. Both teams only having 4 shots on goal in the third period shows how hard both teams played in their defensive zone. Although we had some good chances to turn the game, it just wasn’t our night. We dust ourselves down and go again tomorrow.”

Watkins also commented, “Whilst it wasn’t our night as a team, the Tigers Laidler Team secured the league title in front of a home crowd in a must-win game. They showed huge character and it is a fabulous achievement.  Congratulations to all involved, the players and management team should be really proud of a tremendous team effort.”