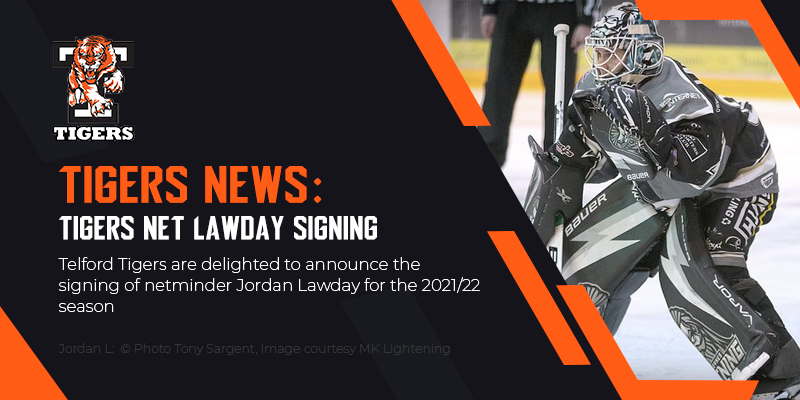 Tigers Net Lawday.Telford Tigers are delighted to announce the signing of netminder Jordan Lawday for the 2021/22 season. Lawday 22, has previously appeared for NIHL National League rivals Milton Keynes Lightning and also appeared in the Spring Cup for Sheffield Steeldogs earlier this year.

Jordan stated, “I can’t wait to get started with the Tigers. I’ve heard nothing but great things about the team and the professionalism of the management, as well as how brilliant and passionate the fans are. I know from playing against these guys how hard they are to beat, so to be part of the group is a real opportunity for me and I am looking forward to the season more than ever.”

Tom Watkins, Head Coach and General Manager, said, “This signing came out of the blue but is a pleasant surprise and not something we had originally planned.  I’m delighted to sign such a high calibre goalie. This signing gives us the most depth and quality in between the pipes this season in the league I think, which could be crucial after such a long layoff for all the players as you never know how their bodies will respond. Previously, we have had similar situations where we have two very good goalies at the same time in Tom Murdy and Sam Gospel, then John Baston and Sam Gospel. It’s the most important position in the team and this signing strengthens us significantly. I expect Brad (Day) and Jordan to develop a competitive but friendly rivalry for the good of the team.”

Telford Tigers would like to thank Gibbon Communications Ltd for their support in agreeing to be Jordan’s personal sponsor for the forthcoming season.

Jordans’s own and loan shirts are available to order now for £100 each (Home and Away). Please see the Tigers’ Online Shop for details.