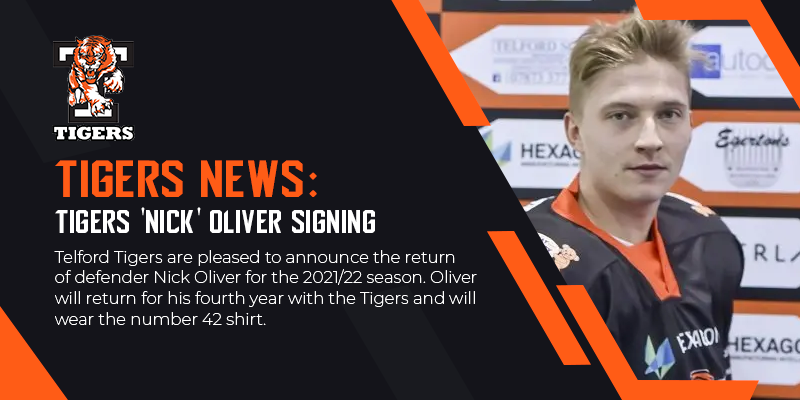 Telford Tigers are pleased to announce the return of defender Nick Oliver for the 2021/22 season. Oliver will return for his fourth year with the Tigers and will wear the number 42 shirt. Oliver joined Tigers mid-way through the 2017-18 season and has been an ever-present since. Oliver proved to be a consistent performer during the recent double-winning campaign.

Nick stated, “After playing a great season with the Tigers winning the double, I am honoured to re-sign and I am excited for the new season to begin. As a team in our last season, we overcame adversity on multiple occasions whether it was playing with a shortened bench, with key players out, or coming back from behind on the scoreboard and securing the points we needed. Talent wins games, but teamwork and intelligence win championships. We all had the same end goal in mind and kept consistent in making that happen. I look forward to starting next season’s campaign and trying to obtain the treble with this team.”

Tom Watkins, Head Coach and General Manager, said, “What a season this guy had! Nick really was the player who stepped up and over performed for me. He started the season as our seventh D-man and established himself as a key member of our D-core. The boys love him in the room for his fun character but he also showed what he is capable of on the ice and I can’t think of another player who shows as much passion as him. He competes, competes hard and loves doing it. You win with guys like Nick in your team, guys that will do whatever it takes to win.”

Telford Tigers would like to thank G-MAC for agreeing to return as Nick’s personal sponsor.

Nick’s own and loan shirts are available to order now for £100 each (Home and Away). Please see the Tigers’ Online Shop for details.