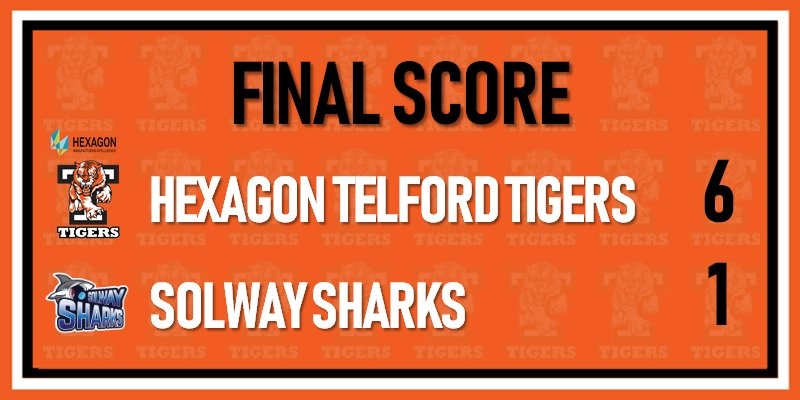 Tigers North Cup Double Delight. Hexagon Telford Tigers 1 took on Solway Sharks in the NIHL North Cup at Telford Ice Rink on Sunday night. Tigers had come from behind to beat Blackburn Hawks 4-2 on Saturday night after trailing 2-1 in the first of their NIHL North Cup games this weekend.

Tigers started much faster than in recent games and opened the scoring in the 3rd minute when good pressure from Dan Mitchell caused the puck to be turned over, leaving Jason Silverthorn to circle the net and pass to Mitchell who swept the puck into the goal. The game was then broken up with both teams taking penalties. Tigers were given a 5 on 3 power play when Solway’s Peter Gapa was called for diving, closely followed by a bench penalty for having too many imports on the ice. Tigers took full advantage when Scott McKenzie was found unmarked by a perfect pass from Joe Hazeldine, leaving McKenzie time to fire the puck into the top corner to extend the lead to 2-0.

Tigers dominated the 2nd period and took control of the game with 3 goals scored in 3 minutes. In the 29th minute, Jason Silverthorn scored with a neat finish after good work from Andy McKinney. Silverthorn then added his 2nd of the night, firing home a rebound from close range after Corey Goodison’s initial shot was saved. Solway then suffered some bad luck as Nick Oliver’s shot from the blue line was cruelly deflected past his own net minder by a Solway defender’s stick, leaving Tigers 5-0 ahead at the end of the period.

The 3rd period saw Tigers exert further pressure with Silverthorn and McKinney both hitting the post. Tigers’ 6th goal was scored in the 44th minute whilst Tigers were on the power play. Scott McKenzie expertly finished off a neat passing move between Warren Tait and Ricky Plant for his 2nd goal of the night. Tigers’ net minder Tom Hovell was denied his first shut out for the club in the 55th minute when he was screened by a defender and could not see Gapa’s shot as it went past him for Solway’s consolation goal. Tigers complete a 4 point weekend with a convincing victory.

Man of the match: Tom Hovell.

After the game Coach Tom Watkins said, “I was very pleased with our performance and result tonight. It’s a different game when you start well and are not chasing from being behind.  I shook the lines up as don’t think we have found much chemistry so far this season. I thought we looked hungry and played with desire to win races and battles. I think that’s as fast as we have played all season.”

Watkins added, “I think the score line flattered us a little tonight as they created several good chances. Perhaps it was just a case of us being more clinical in front of goal. We’ll work hard this week to improve our defensive zone coverage heading into back to back games against Swindon.”