Tigers Off the Mark with Home Win! 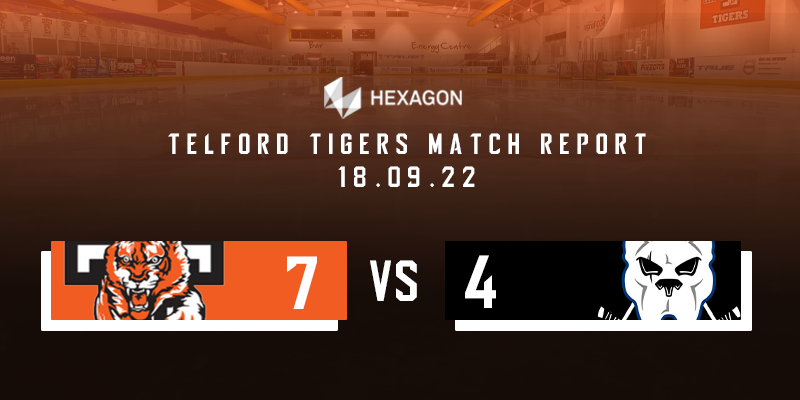 Tigers Off the Mark with Home Win! Hexagon Telford Tigers returned to home ice after losing their opening game of the season on the Road against Leeds Knight. Telford faced the Bristol Pitbulls for the first time in their history after Bristol moved up to the National League this season. Both teams had lost their opening fixture and were looking to kick start their season.

Tigers started the game without Jonathan Weaver and captain Jason Silverthorn who had also missed the defeat in Leeds. Also unavailable was Deakan Fielder.

Tigers made the perfect start to the game with a goal from their opening attack of the night. Rhodes Mitchell-King took possession of the puck on his own blue line and skated unopposed through on goal and shot at Will Kerlin in the Bristol goal. The shot went through Kerlin and into the net to give Tigers the lead. Telford added a second shortly after.  Vladimir Luka intercepted a Bristol pass on their blue line, skated through on goal and smashed the puck past Kerlin to extend the lead. Bristol hit back straight away and had a bit of fortune with the goal. Caly Robertson sent a shot towards goal which hit Nick Oliver’s stick and deflected past Brad Day.

Tigers ended the period two goals ahead after Kerlin made an error when leaving his goal to play the puck behind the net. Sam Watkins stole the puck and sent it in front for Fin Howells who had his back to goal. Howells controlled the puck and back handed into the open net.

Early in the second period, Telford added a fourth goal, Howells scoring his second of the game with a shot that went through Kerlin’s legs. Bristol pulled a goal back within two minutes, Owen Sobchak netting from close range after a pass across goal by Alex Roberts.

Tigers added a fifth goal when Scott McKenzie led a 2-on-1 breakaway and sent a pass to Luka who hit a first time shot in off the post.

Luka completed his hat trick five minutes later. McKenzie was the provider again with a superb pass out of his own defensive zone to Luka who was unmarked on the Bristol blue line. Luka skated in on goal and hit a powerful wrist shot into the net for his third and Tigers’ sixth goal.

Bristol pulled a goal back with a 5-on-3 power play goal after Jake Price was given a charging penalty and Danny Rose was called for tripping. Robertson scored his second of the game with a tap in at the back post. There was still time in the second period for Tigers to score a seventh goal. In the final minute, Nick Oliver sent a shot from the blue line that went into the top left hand corner of the goal with Ricky Plant screening Kerlin.

Alex Roberts scored the only goal of the third period whilst Bristol were on the power play after McKenzie had been called for a cross check and roughing, giving Bristol a four minute power play. Roberts shot low past Day to round off the scoring in the game.

Telford saw out the rest of the game and secured their first victory of the season.

After the game Head Coach Tom Watkins, commented, “It was a very strong performance from all the team. We wanted to get going quickly and play with the lead which was something we hadn’t done yet and got the perfect start with a great goal from Rhodes.

I thought we were very solid at both ends of the rink. We moved the puck very well, were tenacious on our fore check and committed in the defensive zone. A very important win in our first home league game of the season.”