Tigers One Point From Glory 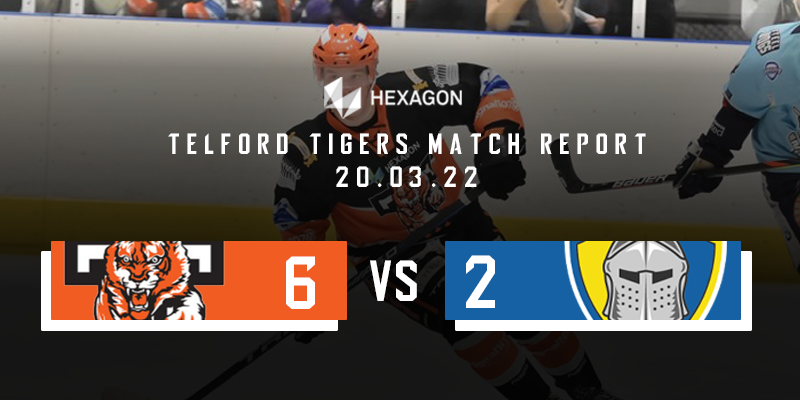 Tigers One Point From Glory. Hexagon Telford Tigers returned to home ice after back-to-back defeats on the road in the league and cup. Having lost the first leg of the National Cup to Sheffield on Friday night, Tigers missed the chance to secure the league title after losing to Swindon on Saturday.  With Swindon cutting the lead at the top to seven points, Tigers knew that either two more wins or a win and a Swindon defeat would bring the title to Telford.

Ross Connolly and Brodie Jesson were the only absentees from the line up with Tigers able to welcome back Jack Watkins after a lengthy absence from the team.

The first period went quickly and early on referees Williams and Hands drew the ire of the Tigers’ supporters. Jack Watkins was called for tripping which looked harsh. The penalty kill worked brilliantly with both Scott McKenzie and Andy McKinney working hard to pressure Leeds and keep the puck away from goal. Bayley Harewood was then awarded an elbowing penalty which looked like a perfectly good hit. Again, the penalty kill was on form, not allowing Leeds any clear chances. The importance of the penalty kill showed even more as Tigers took the lead with a piece of individual brilliance from Harewood. The Tigers’ forward won the puck on the Leeds’ blue line, beat three players with his stickhandling, fed the puck to Joe Aston who sent it back towards Harewood to smash past Sam Gospel in the Leeds’ goal.

Tigers then had their first power play of the game, when Tate Shudra was called for boarding. Tigers spent most of the power play with pressure on the Leeds’ goal and it finally paid off just as the penalty reached the final ten seconds. Fin Howells battled to strip the puck from a Leeds defender and passed across the goal where Vladimir Luka was poised to hammer a shot past Gospel to give Tigers a second goal.

The opening minute of the second period saw the third goal for Telford. A Leeds turnover led to Scott McKenzie finding the unmarked Jack Hopkins who beat Gospel with a low shot to his left.

Leeds pulled a goal back with a face-off win being sent round the boards to Tate Shudra who passed in front for Brown to shoot past Day.  Tigers didn’t panic with conceding a goal and took full control of the game with a fourth goal shortly after. Harewood showed terrific puck handling skills again when found unmarked by McKenzie. Skating in on goal, he waited for Gospel to commit and shot past him for his second of the game.

With Tigers back to their fluent best, a fifth goal arrived. Another Leeds turnover allowed Nick Oliver to pass to the unmarked Luka who took his time and placed a perfect shot past Gospel.

With the period entering the final two minutes, Leeds gave away a needless penalty with Ben Solder called for tripping. Tigers power play dominated the possession and, with just eight seconds of the period left, Jason Silverthorn sent a cross-ice pass to Hopkins for a tap in and Tigers’ sixth goal.

Leeds scored a consolation goal early in the third period with Brown scoring his second of the game. Tigers sensibly controlled possession for the rest of the game and saw out a vital victory to take a huge step towards the league title.

With Swindon beating Bees the same evening, they travel to Basingstoke on Friday and must win to keep their faint title hopes alive. Anything less than a win will mean the league title will go to Telford. If Swindon win on Friday, Tigers can win the league with a victory over Milton Keynes on Saturday.

Following the game, Head Coach Tom Watkins commented, “It was a really positive performance, we were really solid and very clinical. Considering we were playing our third game in three days and given that every game we played had a lot of importance attached to it our energy, work rate and commitment was excellent and we were very professional.”