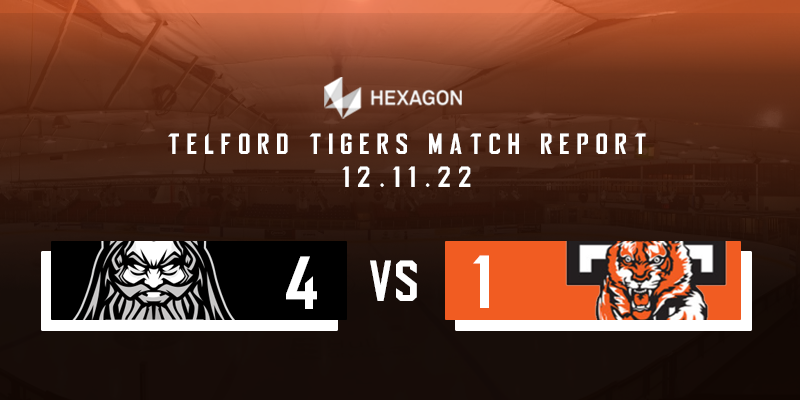 Tigers Outplayed by Lightning. Hexagon Telford Tigers travelled to Milton Keynes to take on the Lightning on Saturday evening. Milton Keynes were flying high in the early season league standings and in their previous game had become the first team to beat league leaders Leeds Knights. Tigers welcomed back a number of key players with Scott McKenzie and Jack Watkins able to return to the lineup.

Tigers needed a strong start to quieten the sizeable crowd but were caught out within the opening two minutes of the game. Corey Goodison was called for tripping and Milton Keynes given a power play. Lightning opened the scoring when a shot from the blue line hit a Tigers’ defender and landed perfectly for Tim Wallace to shoot past Brad Day and give Milton Keynes the lead.

Tigers hit back with their own power play goal midway through the opening period.  Hallden Barnes-Garner was called for tripping, allowing Tigers a perfect opportunity to level the scores.

Tigers’ power play has been effective of late and a well worked passing play between McKenzie and Jason Silverthorn set up Vladimir Luka to get Tigers on the score board.

But with five minutes of the period left, Lightning regained the lead with a breakaway goal from Deivids Sarkanis.

A goalless second period saw Tigers chasing the game in the third period and, with two minutes gone, Lightning added a third goal. Sam Talbot finishing from a Wallace pass. With a two-goal lead, Milton Keynes never looked like losing and added a fourth goal with ten minutes of the game left through Callum Field.

After the game Head Coach Tom Watkins, commented, “Unfortunately, we were beaten by a better team tonight. We got a bad start after the puck deflected off one of our players on a shot on a Milton Keynes power play early in the game and the first period was a struggle, but we followed that up with a strong second period where we were much more disciplined. I don’t think we earned any bounces and, as a team, they were deserved winners in front of over 2000 fans.