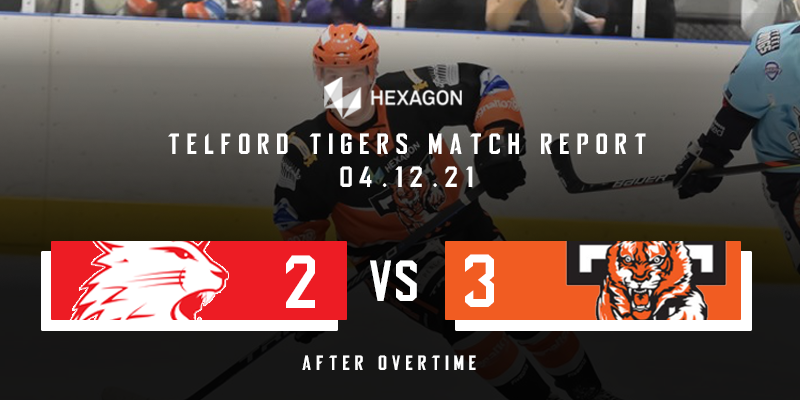 Tigers’ Overtime Silver Lining. The Hexagon Telford Tigers travelled to Swindon to take on the top of the league Wildcats in the NIHL National Division. Tigers were still without the injured trio of Jack Watkins, Ricky Plant and Ross Connolly but were able to add new signing Vladimir Luka to the lineup.

Swindon had won nine out of their last 10 games and started strongly, taking the lead in the fourth minute. A shot from Tyler Plews beat Brad Day in the Tigers’ goal to give Swindon the perfect start. The game was very physical with both teams finishing their hits well. Swindon added a second goal midway through the first period with Wildcats’ player-coach Aaron Nell finishing off a pass from Edgars Bebris, giving Day no chance. Just as the game appeared to be slipping away, Tigers hit back. Danny Rose sent Jason Silverthorn in on goal and the Tigers’ captain beat Swindon netminder, Renny Marr, with a low shot to get Telford on the scoreboard.

The condition of the ice surface after the end of the first period was a cause for concern for both teams as the Zamboni had broken and the rink officials were unable to resurface the ice between periods as usual.

Tigers didn’t let the issue with the ice concern them and midway through the game got a deserved equaliser. Jonathan Weaver continued his recent run of goals with a powerful shot that flew past Marr to draw the sides level.

As the ice surface deteriorated further, both teams struggled to pass accurately and the game became a scrappy affair with chances at a premium. As the game was heading to the end of the third period and with the sides level, Swindon’s Floyd Taylor was called for tripping giving Tigers a crucial power play. With the first minute of the power play gone, regulation time ended, sending the game to sudden death overtime.

Tigers still had a minute left of the man advantage to start overtime and just thirty seconds into overtime, Tigers scored the winner.  Silverthorn scored his second of the night with a cool finish after being set up by Weaver, sending Telford to a well-deserved victory and closing the gap on Swindon to 4 points at the top of the league standings.

After the game Head Coach Tom Watkins, commented, “That was our most complete performance of the season, we competed really hard against a big, strong, heavy team and won our battles at the front of the net. The only disappointment was that we went 2-0 behind in the first place but we showed good character not to panic, stuck to the process and came up with a goal before the end of the first period.

We competed really hard and got what we deserved. Mentally that’s a big step for us as Swindon had our number in previous games this season, so to play how we did and come up with the win is a very positive way to start the weekend.”