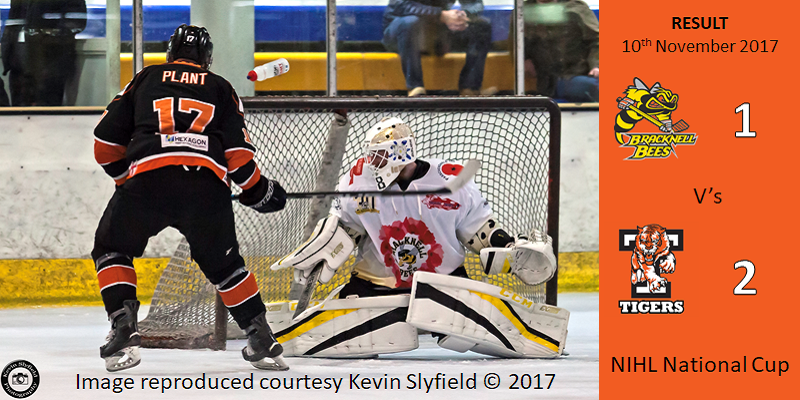 Telford Tigers 1 travelled to Bracknell on Saturday night for the first of back to back NIHL National Cup games against the Bees.  Tigers came into the game in a bad run of form having won only one game in the last nine, losing top spot in the league and dropping to third in Group D of the National Cup table.

Tigers iced the returning Adam Jones for the first time since he signed earlier this week and saw Captain Jason Silverthorn return from injury, but were still without Jonathan Weaver.

The first period ended goalless, with Tigers coming closest in the 10th minute when Joe Miller hit the post with a wrist shot.

The second period saw Bracknell take the lead in the 34th minute through Shaun Thompson. Tigers applied pressure on the Bracknell net but they were denied again by the post – this time from an Adam Taylor shot. Bracknell ended the period on top, and ahead by a single goal.

The third period was 5 minutes old when Tigers finally got on the score sheet. Silverthorn scoring from a Scott McKenzie pass to level the game.  Despite chances at both ends no further goals were scored, leaving the game tied at 1-1 at the end of regulation time.  Into overtime Tigers needed just 1 minute of the extra period, Ricky Plant fired home from Silverthorn’s pass to win the game and gain 2 points for the Tigers.

Man of the match – Dennis Bell.

After the game coach Tom Watkins said, “Overtime is always fun and much sweeter when you take the points. I thought tonight was a good performance, we moved the puck well and moved our legs. It was a tight game and both goalies came up with some big saves. Watkins added, “Bracknell took the lead, but I thought in the third period we played the right way, we pushed hard, shortened the bench and got our reward.”

Telford Tigers 1 are playing Bracknell Bees at home on Sunday 12th November with a 6pm face off. For more information and ticket details go to www.telfordtigers.net.