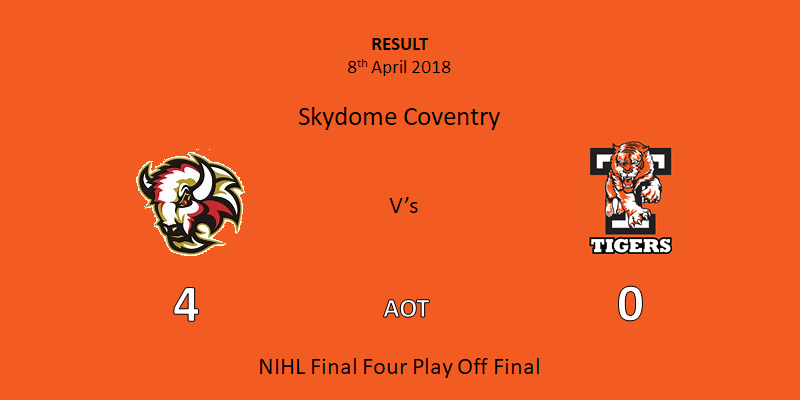 Telford Tigers 1 played against Basingstoke Bison in the NIHL Final Four play off final at Coventry Arena on Sunday. Tigers had beaten Peterborough Phantoms 4-1 in the semi final and faced off against Basingstoke who had beaten Sheffield Steeldogs. Tigers had triumphed in the Northern Final last weekend beating Sheffield over 2 legs and were looking to win their second trophy this season.

Tigers started the game on the back foot and struggled to clear their zone. In the 7th minute, an offside call in the Bison end saw a face off in the Tigers’ defensive zone and after Jason Silverthorn lost the face off, Macaulay Halford took a trip to the penalty box for kneeing. Just 14 seconds into the power play, Kurt Reynolds tipped Roman Malinki’s shot past Denis Bell into the Tigers’ goal.  Basingstoke’s slick passing was causing problems for the Tigers as Bell was called into action on numerous occasions. Tigers’ luck was definitely out as their best chance of the period saw Corey Goodison’s shot ring off the post. Basingstoke added a second goal in the 17th minute when Aaron Connolly’s wrist shot beat Bell low into the net. Tigers ended the period 2-0 down.

The 2nd period started badly after Jason Silverthorn took a high sticking penalty and Tigers were punished again. Josh Smith scoring to put Bison 3 goals ahead. As Tigers desperately tried to get back into the game, they were caught out again as Ivan Antonov broke away to score a 4th goal for Basingstoke leaving Tigers with a mountain to climb.

The 3rd period saw Silverthorn and Weaver go close and Tigers were pushing hard to get back into the game but they were unable to get past Dean Skinns in the Bison goal who fought off everything that was shot at him. Bison held out and were crowned as NIHL Playoff champions

After the game coach Tom Watkins said, “We didn’t deserve it. Basingstoke were worthy winners and outplayed us. They started the game hungrier, faster and won all their battles, next thing you know you’re 2-0 down at the end of the first period and then you have to chase the game. People say we didn’t get any bounces but we didn’t earn any either. Congratulations to Doug and his team.”

Watkins added “It’s not how we wanted to end the season but I’d like to take the opportunity to thank all the players and staff for all their efforts.  I’d like to thank the fans, we couldn’t get it done today but their support has been appreciated all season.”