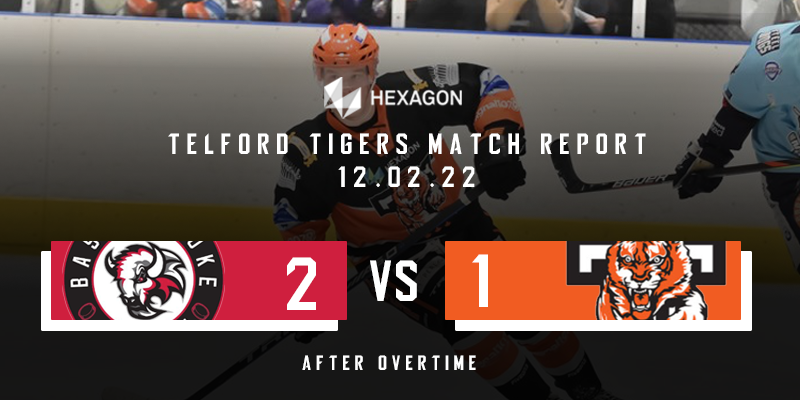 Tigers Positive Despite Overtime Loss. Hexagon Telford Tigers returned to league action with a trip to Basingstoke to take on the Bison. Telford had won a place in the National Cup Final with a second leg comeback win over Milton Keynes Lightning in midweek and sat top of the league standings by four points with a game in hand on second-placed Swindon Wildcats.

The Tigers lost their last visit to Basingstoke in what was a disappointing performance and were looking to make a fast start to the game with the Shropshire side having the better of the opening exchanges. Scott McKenzie went closest with a shot that struck the crossbar.

Tigers edged the chances in the first period and went close again, with McKenzie hitting the frame of the goal a second time.

Both teams owed their respective netminders for keeping the game level. Brad Day in the Tigers goal and Alex Mettam in the Bison goal were superb throughout the contest.

Early in the second period, Austin Mitchell-King sent a pass from behind the goal to Andy McKinney but the Tigers’ forward shot wide.

With the game finely balanced at the halfway stage, Basingstoke took the lead when Ashley Tait was on hand to score after Day had made a save from Alex Roberts’ shot, but the puck fell perfectly for Tait to slam it into the goal.

Telford were playing well but not getting many breaks and with time slipping away, the Tigers finally got the goal they deserved. With just under ten minutes of the third period left, Luka led a breakaway and sent a pass across to McKenzie who rifled the puck past Mettam to draw the sides level.

Tigers were forced to kill off a power play late in the game and were again indebted to Day who had to make a couple of point-blank saves to prevent Basingstoke from taking the lead.

With no further scoring, the Tigers secured a point and the game went to overtime.

Overtime left Tigers cursing their luck as McKinney’s shot was tipped by McKenzie against the post and rebounded out for Bison to attack and score through Liam Morris to win the game within the opening minute of overtime.

With Swindon winning their game against Peterborough, the Tigers’ lead at the top of the league has been cut to three points.

Man of the match: Brad Day

Following the game Head Coach Tom Watkins, commented, “I’m pleased with a point, for long periods of the game it didn’t feel like we going to get anything at all, so we’re happy for a valuable point. Brad Day kept us in the game and must have saved six or seven quality chances on the penalty kill in the third period. He was outstanding as was Alex Mettam in goal for Bison. I thought Scott (McKenzie) had won it in overtime when he hit the post from a tip, only for Bison to go to the other end and wrap it up on the same shift. That’s the way hockey goes sometimes.”