Tigers put out the Bulldogs 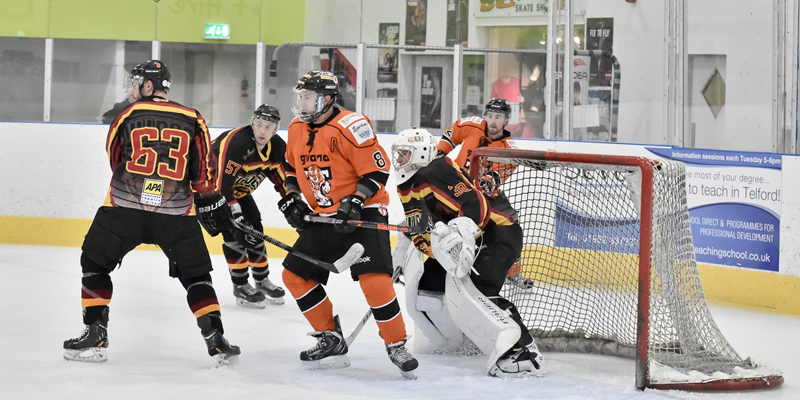 On Sunday Telford Tigers 2 hosted Bradford Bulldogs in the hope of gaining another 2 points.  Tigers 2 started strong putting pressure on the Bradford net from the start.

The game progressed with both teams creating good scoring opportunities, but it was Tigers who found the back of the net first with a shot from #72 Callum Bowley assisted by #94 James Smith and #4 Karol Jets, at 13.17.

The 2nd period saw the Tigers out shoot the Bulldogs and their netminder, Phillip Pearson keeping them in the game.

On 27.40 Tigers scored a power play goal thanks to #4 Karol Jets, after Bradford’s #57 Liam Salt received a 2 minute penalty for tripping.

Tigers played some nice one touch hockey and 4 minutes later were rewarded again by #Karol Jets scoring again from a pass from #8 Simon Harrison and #75 Liam Preece. The  2nd period ended 3-0 in Tigers favour.

The third period saw the Tigers start strong and quickly score again after 12 seconds to give #4 Karol Jets his hat trick. Bradford continued to push forward and they found the back of the net at 42.48 with a goal for #19 Joshua Richardson. This gave Bradford the edge and they continued to pressure the Tigers net until they were rewarded with a power play goal scored by #88 Ryan Kemp at 49.15.  This led to a nervy last few minutes but Tigers held out for the win.

Tigers outshot the Bulldogs throughout the game and were rewarded with the 4-2 win.