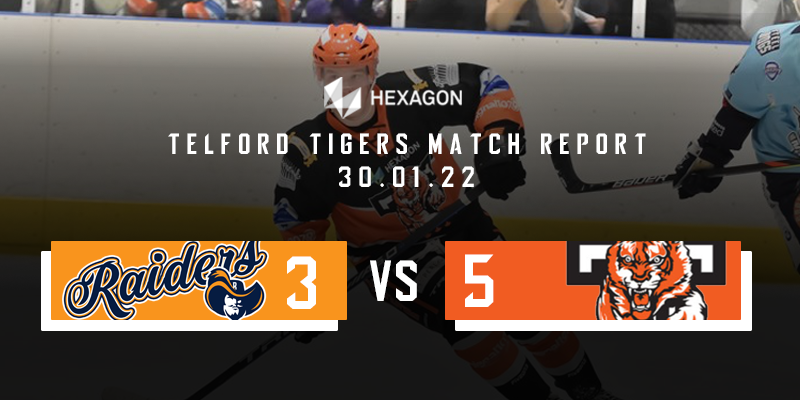 Tigers’ Raid Romford to Stay Top. Hexagon Telford Tigers travelled to Romford for their second game of the weekend after losing a close fought game against Peterborough Phantoms on Friday night. Tigers had won their previous two games against the Raiders so far this season and the game represented a top v bottom clash.

Raiders started the game well and almost scored on the opening shift, with Dan Scott forcing a save from Tigers’ netminder Brad Day. Five minutes into the game, Raiders’ Lukas Sladkovsky complained to the officials that he had been hooked when about to shoot but he took his protests too far and was awarded an abuse of an official penalty. Tigers controlled the puck well on the power play and opened the scoring when Scott McKenzie sent a cross-ice pass to Vladimir Luka who dispatched the puck past Ethan James in the Raiders’ goal.  James injured himself in trying to make the save and was unable to continue, being replaced by Michael Gray. Tigers extended their lead with a second goal shortly after. Raiders’ Sean Barry made a poor pass in front of the goal sending the puck straight to Jack Hopkins who scored with ease.

Telford were forced to kill off an extended 5-on-3 power play early in the second period as Jonathan Weaver was called for tripping and McKenzie for high sticking. McKenzie’s penalty was particularly frustrating for the Tigers’ bench as the stick that hit the Raiders’ player was not McKenzie’s but the Raiders’ players own teammate. The penalties were successfully killed off thanks to good work by Day. But with the period entering the final five minutes, Raiders got on the scoresheet. Day had made a terrific save from a JJ Pitchley breakaway but could not prevent Jake Sylvester from tapping home at the far post to cut Tigers’ lead in half.

Early in the third period, Tigers scored their third goal. McKenzie set up Luka with a terrific pass allowing Luka to shoot low past Gray. Once again, Tigers had to face an extended 5-on-3 power play after Danny Rose was called for hooking and McKenzie for tripping. Erik Piatak benefitted from a lucky bounce when Thomas McKinnon’s attempted clearance hit a stick and landed perfectly for the Raiders player to tap over the line. The goal spurred Tigers into life and they scored twice in twenty-four seconds.  An Andy McKinney shot deflected to Bayley Harewood in front of goal. The Tigers forward dragged the puck to his left and slid it past Gray. Then Harewood and Jason Silverthorn combined to set up McKinney who blasted a fierce shot past Gray to put Tigers 5-2 ahead.  A late Aaron Connolly goal gave Raiders hope of a comeback but despite pulling Gray from the goal for the final minute of the game, they could not close the gap. The win sees Tigers go two points clear at the top of the league with a game in hand on nearest rivals Swindon Wildcats.

After the game Head Coach Tom Watkins, commented, “Brad Day kept us in the game and effectively won it for us. He stood on his head at times and made a number of key saves. I think Raiders put us under a lot of pressure and were very difficult to contain on the rush. It was definitely a game we could have lost so to come away with a win is huge. These next four weeks is huge for our season with so many games to play. To lose Thomas  McKinnon tonight to an injury is a worry.”