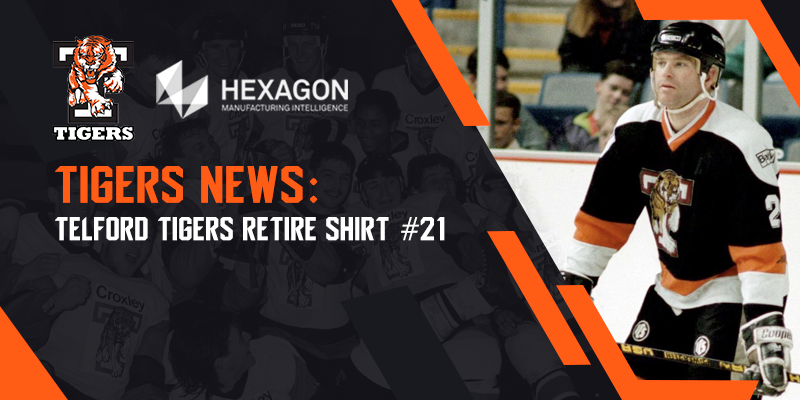 Tigers Retire Shirt #21 – The Hexagon Telford Tigers will retire the famous #21 shirt of the man who set the club in motion almost 40 years ago – Chuck Taylor.

The Canadian defenceman arrived in Shropshire from Solihull Barons in 1985, just months after the opening of the Telford Ice Rink.

Taylor’s leadership saw the Tigers quickly establish a dedicated local fan base, alongside widespread support from Shropshire’s business community. He led the club to a string of national honours, including the British Division One Championship in 1987 and the Benson and Hedges Plate in 1992.

His playing number will be retired and lifted to the rafters of Telford Ice Rink ahead of the Tigers’ English National League game against vs Basingstoke Bison on Sunday 24th October, face off at 6 pm.

Telford Tigers General Manager & Head Coach, Tom Watkins, said: “Chuck Taylor is a legend of ice hockey in Telford and without his hard work the club wouldn’t be here today. He made key contacts with fans and businesses in Shropshire that are still going strong now. That groundwork is so important for the club. We wanted to mark those achievements by ensuring Chuck’s shirt will be seen in the rafters at Telford Ice Rink for generations to come. I am excited to honour one of the founding fathers of Telford Tigers in this way and I know the fans will feel the same.

Tom continued, “The ceremony will be a great opportunity for us all to come together as fans of ice hockey in Telford and celebrate the occasion. Taylor scored a mammoth 346 goals and 382 assists in 279 games for Telford Tigers over nine seasons, often winning games single-handedly with his trademark blue line slapshot. He guided the early careers of many Tigers juniors and countless players across the country were coached by Taylor as a youngster. But it was his impact within Shropshire’s business community that had an equally important impact on the growth of the club. The Saskatoon native would spend days knocking on doors of businesses across the county, drumming up sponsorship that would keep the club alive”.

Taylor, who now works as an executive in the television industry, said: “I always look back at my time in Telford as one of hard work, but also an incredible achievement for a start-up club. The passion for ice hockey in the town was immediate from the first few weeks and that continued as we went from strength to strength. Businesses in Shropshire were very open to working with what was a new sport to the area. Nobody had ever heard of ice hockey! But as soon as I got them to a game, they were hooked by the atmosphere generated by over 2,500 screaming fans. It is a fantastic honour to have the #21 shirt retired in my honour. I feel very humble about it but also delighted to keep such close links with the club”.

“Telford Tigers is an Ice Hockey club steeped in its tradition and history. Some great stories to be told and some not so good stories to be told. For sure though, we are today very much a product of our past. Without Chucks vision and input over 40 years ago there would be no club today. It goes without saying therefore, that we are all proud and immensely grateful for his tenacity and work in originally setting up the club.As we all know, within Ice Hockey there can be no greater accolade than a shirt retirement. A memory that we can all cherish at every game to be played at Telford for future generations.”

Chucks #21 shirt will sit alongside two former Tigers players who have previously had their shirt numbers retired in #9 Claude Dumas & #19 Daniel MacKriel.

Chuck will be in attendance at the Tigers National League fixture on the 24th of October to allow the fans to honour Telford Tigers legend #21 Chuck Taylor.