Tigers Ride Out the Storm to Take Top Spot 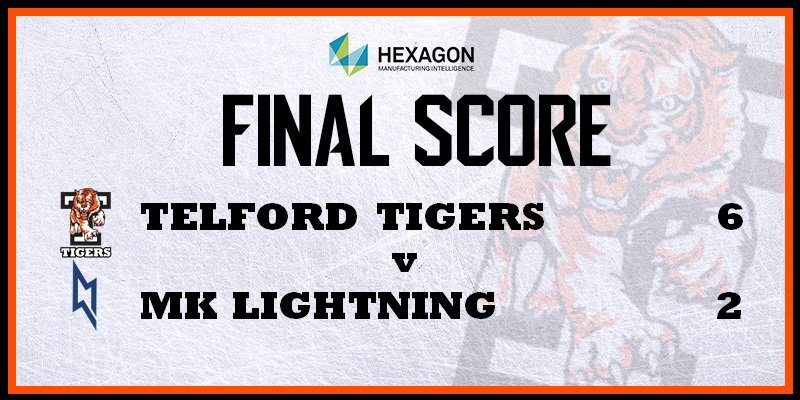 Tigers Ride Out the Storm to Take Top Spot. Hexagon Telford Tigers returned to home ice on Sunday night to take on Milton Keynes Lightning after a fantastic 5-3 win on the road the previous evening against Swindon Wildcats. Tigers pulled off a terrific victory to cut Swindon’s lead at the top of the table to a single point, with Tigers having a game in hand.  Tigers’ injury list still contained Ricky Plant, Jonathan Weaver, Adam Taylor and Joe Aston, but Ollie Lord was able to return to the lineup.

Tigers made a bright start to the game with Scott McKenzie going close in the opening seconds, deflecting a Dominik Florian pass on goal, with Skinns making the save. Moments later, Skinns could do nothing to prevent Tigers’ opening the scoring in the 3rd minute. Fin Howells won the puck in the right circle and passed to Jason Silverthorn behind the goal, the Tigers’ captain immediately passed the puck to Brandon Whistle who shot first time past Skinns low down, before the netminder could react. Tigers deservedly ahead at this stage.

Milton Keynes were determined to make the game a physical, scrappy one and both referees seemed to be letting things go until McKenzie reacted to a slash to his hands from Cale Tanaka. The Milton Keynes forward went after McKenzie and ended up with a penalty for roughing. Tigers ended the period on the power play but couldn’t convert it.

With almost the first action of the 2nd period, Milton Keynes levelled the score. Tomas Kana reacting first in a goalmouth scramble to force the puck home. Tigers reacted in the best fashion after conceding by retaking the lead less than 2 minutes later. James Smith sent Jack Watkins clear on the left-hand side and Watkins hit the puck in off the post and into the net for Tigers’ 2nd goal. Skinns then thwarted Whistle with a terrific glove save.

Tigers extended their lead in the 28th minute, whilst on the power play after Rio Grinell-Parke had been awarded a tripping penalty. Dan Mitchell sent a cross-ice pass to Watkins who hit his shot back towards goal and in off Skinns. Day was then called on to make a fantastic save from Tanaka. The save was crucial as Tigers immediately scored a 4th goal. Danny Rose hit a slap shot from the blue line that deceived Skinns and went in over his blocker. Milton Keynes had the better of the final 5 minutes of the period, pulling a goal back through Liam Stewart after Day had saved his initial shot, to make it 4-2. Milton Keynes went close several times after, with Tigers scrambling to block shots and clear the puck. Kana rang a shot off the post and Stewart went close again, with Tigers relieved to hear the end of the period buzzer.

Tigers came out in the 3rd period and took the game to Milton Keynes, scoring a 5th goal in the 42nd minute. Ross Kennedy hit a slap shot from the blue line which was tipped in front of goal by Jason Silverthorn, redirecting the puck between Skinns’ legs to score. Tigers sealed the win in the 51st minute, with an almost identical goal to the 5th one. Kennedy’s shot from the blue line was tipped by Silverthorn, over the pads of Skinns and into the net for Tigers’ 6th goal. The remainder of the game was scrappy and full of penalties and with the result secured, Tigers saw out the game to earn a 4 point weekend and maintain their unbeaten home record. The win, coupled with Swindon’s defeat in Peterborough, means that Tigers go top of the table by a point and also have a game in hand.

After the game Head Coach, Tom Watkins commented, “It was another great result for us after last night’s road win in Swindon. I think we were probably a little banged up after last night’s game, it took a lot out of us but we’ve got a lot of resilience in this group and the boys were ready to play again. It was important to make a good start to heap the pressure on Milton Keynes after their result last night (a 6-2 loss at home). Thankfully we did that and I felt we controlled the game. Our penalty kill has been strong all weekend, it really typifies the rest of our game, our spirit and we battle and compete for every shift. Tonight was a real team effort.”

Hexagon Telford Tigers 1 will next be in action on home ice on Sunday, 24th November against Romford Raiders. Match Night tickets available to purchase here!