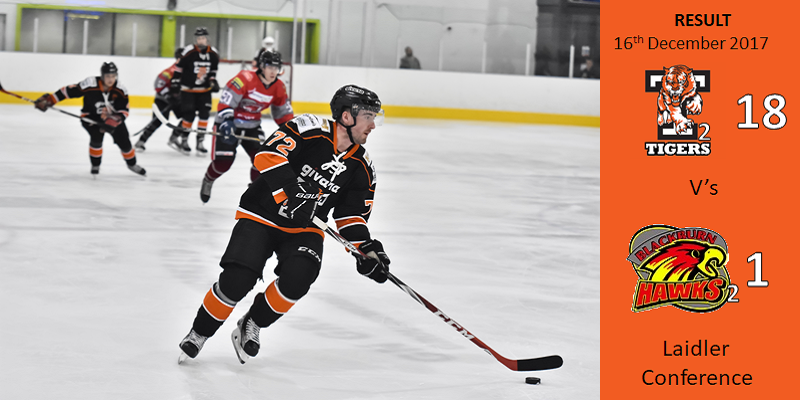 They started well with the majority of the play being in the Tigers favour, and at 6.36 The Hawks #96 Carl Price was given a 2 minute penalty for hooking. This gave Tigers the man advantage and they were rewarded at 7.01 with a goal from the latest signing #39 Joe Aston, who returns to Tigers colours from a short spell at Nottingham.

Tigers continued their scoring with goals from #49 Daniel Thomason and #72 Callum Bowley and the period ended 3-0.

The 2nd period was a scoring frenzy with 8 goals being scored over the period. 2 more goals from #39 Joe Aston to secure his hat trick. #91 Charlie Hammerton scored 2, #72 Callum Bowley scored another to make it 2 for him.

Half way through the period Tigers changed their netminder which gave under 18, Ryan Lewis the opportunity to get between the pipes for a good amount of the game.

A few shots hit the post of the The Hawks goal and the scoring continued with a slap shot from the blue line from #59 Jordan Jolly, a goal from #27 Callum Griffin and a short handed goal from #66 Matt Price.

The Hawks pushed forward and were rewarded with a goal from #96 Carl Price at 35.07 but that wasn’t enough to threaten the Tigers and the period ended 11-1.

The third period was similar to the 2nd, with Tigers dominating the game. #72 Callum Bowley scored another 2, #91 Charlie Hammerton and #49 Daniel Thomason both gained their hat tricks and #18 Joshua Hustwick getting 1.

Under 18’s player #2 Rhys Howells scored on his debut for Tigers at 51.13 after fighting hard to win possession.