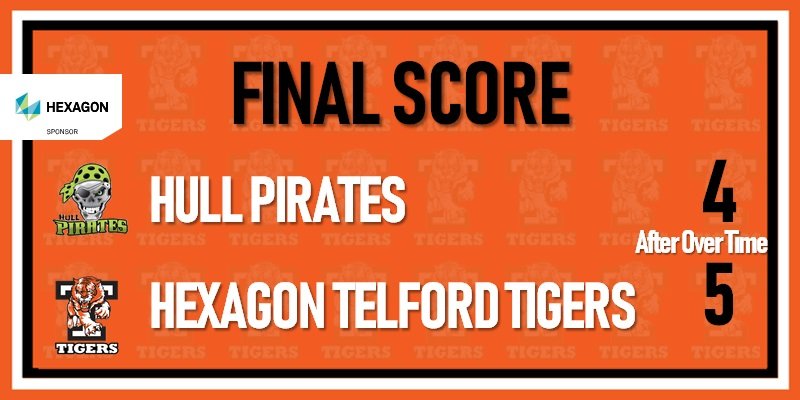 Weaver’s Overtime Winner Sinks Pirates.  Hexagon Telford Tigers 1 travelled to Hull Arena on Sunday evening for a vital NIHL Moralee Division game with Hull Pirates. Tigers had lost to Hull 10-7 the previous evening in Telford and were replaced at the top of the table by the victors. Tigers were looking to bounce back from the damaging defeat at home or face the disappointment of falling further behind in the title race.

Tigers were still without Dan Mitchell and Corey Goodison. Starting in goal for Telford was Sam Gospel and Ashley Smith in goal for Hull.

Tigers started strongly and had three shots in the first minute that all rebounded off Smith in the Hull goal but were cleared before a Tigers’ forward could get to the puck.  Referee Hewitt then missed a clear slashing call on Hull’s Bobby Chamberlain with Joe Hazeldine the recipient of a slash to his hands that somehow was missed.  Tigers’ early pressure could not find a breakthrough and they were caught out in the 5th minute when Matty Davies sent Lubomir Korhon away through the middle of the ice. Korhon passed to Lee Bonner who applied the finish to give Hull the lead.  Tigers had given away far too many penalties during the previous game and  this continued. Andy McKinney took exception to Hull’s Lee Hayward holding on to his stick and dropped the gloves but Hayward refused to engage. McKinney was given a roughing penalty.  Tigers killed off the penalty with Gospel standing tall, making two key blocks.  Tigers gained momentum from the penalty kill and equalised in the 11th minute. Jason Silverthorn’s shot was saved by Smith but Tigers were first to the rebound with Scott McKenzie forcing the puck over the line to level the game.  Tigers then had to kill off a further penalty when Hazeldine was called for interference. During the subsequent power play Hull’s Kevin Phillips had a glorious chance but shot straight at Gospel. As the period ended Gospel made a magnificent glove save from Hull’s Jason Hewitt to keep the scores level.

The second period proved to be a fast paced, close fought one. Hull started strongly with Gospel again being required to save Tigers with a terrific glove save followed by a last-gasp pad save from a Lee Bonner one on one break away.  As the period entered the final five minutes, Adam Taylor and McKinney had a two on one break away but a Hull defender broke the play up as Taylor looked to pass to McKinney. Hull cleared the puck and a rare mistake by Jonathan Weaver allowed Bonner in on goal. Gospel saved the initial shot but Davies was on hand to put the rebound into the net to put Hull ahead. Tigers didn’t deserve to be behind in the game and pressed right up to the end of the period. As the period entered the final thirty seconds, Tigers got the reward their play had deserved. Warren Tait and Taylor combined to set up Doug Clarkson who was positioned in the left circle. Clarkson hammered an unstoppable wrist shot in off the bar past Smith to level the game at 2-2.

Tigers made the worst possible start to the third period, conceding a goal in the 42nd minute. Gospel appeared to have covered the puck after making a save but Bobby Chamberlain poked the puck between the leg pads of Gospel and into the net to put Hull 3-2 ahead.  Hull were threatening with almost every attack but Gospel was proving to be a one man wall, making several saves from point blank range including one glove save from a Jason Hewitt shot that was sensational.  As the game entered the final five minutes, Tigers equalised. McKenzie fought hard to win a puck battle and found Clarkson in front of goal. Clarkson’s first shot was blocked but his follow up shot found the back of the net to make it 3-3.  Joe Hazeldine then took his third visit to the penalty box for hooking, handing Hull a power play heading into the final three minutes of the game. Hull took full advantage of the extra man, finding Hewitt unmarked in the right circle with the Hull player rifling a shot into the net past the despairing dive of Gospel.  Tigers came back with the perfect answer just fourteen seconds after conceding what looked like the winning goal. A great set play from the face off after Hull’s goal saw Silverthorn win the draw, dump the puck in the corner of Hull’s defensive zone where it was retrieved by McKenzie who then passed to Ricky Plant behind the goal. Plant waited patiently for the opening and played a perfect pass for Silverthorn to skate onto and hammer past Smith for Tigers’ fourth goal.  As the game entered a frantic final minute of regulation time, both teams would have one last chance to win the game. First Chamberlain shot wide when in a good position and then McKinney had a breakaway foiled when he miscontrolled the puck before he could shoot. The scores were level at 4-4 at the end of the period meaning the game would go to sudden death overtime.

Hull had control of the puck for the first minute of the overtime period and Gospel again rescued Tigers with a magnificent toe save at the far post when Chamberlain looked odds on to score. Tigers broke away and Davies was forced to commit a tripping penalty to prevent Tigers having a one on one chance, giving Tigers a four on three power play. During the power play, Tigers played the puck well, maintained control and slick passing between Clarkson and McKenzie presented an opening on the left circle for Weaver to hammer a slap shot through Smith and into the net to give Tigers the win and a huge two points. The win sends Tigers back to the top of the table a point ahead of Hull.

Man of the match: Sam Gospel.

After the game coach Tom Watkins commented, “We dug deep tonight, after the disappointment of last night. The guys laid it on the line tonight and found a way to win against a quality team. To keep coming back from being behind all night to win shows that our character and resiliency really shone through this evening. I am really proud of the guys tonight, I’m shattered so can only imagine how they feel. It was a great game of hockey in front of a packed house.”

Hexagon Telford Tigers 1 return to play at Telford Ice Rink Saturday 23rd February 2019 at 19:00 in the NIHL Moralee Conference against Blackburn Hawks. Hexagon Telford Tigers 2 are next in home action at Telford Ice Rink on Sunday 24th February 2019 at 18:00 in the NIHL Laidler Conference against Blackburn Hawks 2. For details of all future fixtures, check out the Tigers fixture list and www.telfordtigers.net/tickets for ticket information.