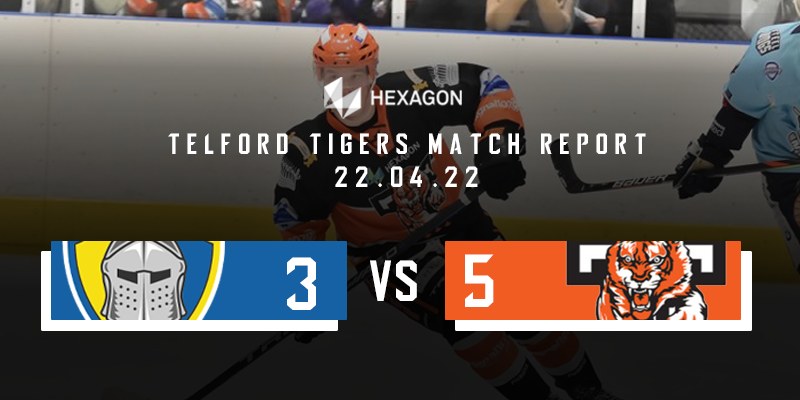 Tigers Seal Final Four Place. Hexagon Telford Tigers travelled to Leeds for their final road game of the group stage knowing a win for Tigers or a Milton Keynes win against Bees the same evening would see them qualify for the semi-finals.

Tigers spent most of the opening seven minutes of the contest on the penalty kill after a string of penalties were awarded against them. Jake Price, Corey Goodison and Thomas McKinnon were all sent to the penalty box, giving Leeds extended power playtime.

Some resolute defending by the penalty kill unit and a terrific save from close range by Brad Day kept the contest scoreless. Once the penalties had been killed, Tigers took the lead. A shot from Bayley Harewood was saved by Sam Gospel in the Leeds’ goal but Scott McKenzie was on hand to fire the rebound into the open net.

Leeds hit back within a minute with a similar goal. A shot from Kieran Brown was saved by Day but Adam Barnes scored the rebound to level the scores.

Tigers finally got a power play late in the period when Jordan Griffin cross-checked Deakan Fielder and then both dropped the gloves, with Fielder the clear winner. Tigers were then handed an extended 5-on-3 power play when Cole Shudra was called for slashing.

Tigers took the lead thirty seconds into the power play with a shot from Jonathan Weaver from in the slot which flew low past Gospel. With one second of the period left, Tigers added a second power-play goal and the third goal of the period. The puck was cycled back to the blue line where Vladimir Luka was waiting to hammer a thunderbolt of a shot past Gospel who never moved.

Leeds pulled a goal back in the opening minute of the second period. Tigers turned the puck over in their own defensive zone allowing Ethan Hehir to shoot between Day’s legs to draw the home side within a goal of Tigers’ lead.

Day then made a superb save from a Matty Davies chance with Day blocking the puck on the line to prevent it from going in.

As the period progressed, Leeds continued to pressure Day’s goal but equally, Tigers looked dangerous with every attack and saw Ricky Plant and Jack Watkins denied by saves from Gospel.

Tigers scored a fourth goal and regained a two-goal lead. Luka sent a speculative shot from against the boards by the left circle which deceived Gospel and went off his glove and into the net.

Tigers ended the period on the offensive and Harewood set up Jack Hopkins but Gospel made another save from close range.

Early in the third period, Leeds pulled a goal back. Harry Gulliver shot in off the bar giving Day no chance.

Any thoughts of a comeback immediately ended when Tigers scored their fifth goal.

Fielder’s shot was well saved by Gospel but Austin Mitchell-King was on hand to tap the puck into the open net and seal a superb road win for Tigers, sending them to the Final Four in Coventry next weekend.

With Milton Keynes winning against Bees, Tigers and Lightning will play on Sunday evening to determine the group winner with both teams through to the semi-finals.

After the game Head Coach Tom Watkins, commented, “It is a great achievement by the team. We’re going to the dance! After a very long trip up to Leeds, we were just pleased to get there in time for the face-off. It was another gritty, disciplined performance in which we controlled the third period to shut down the game and ultimately pick up the points that send us to the Final Four in Coventry next weekend. It would be great to see as many Tigers fans as possible come to the game this Sunday (against Milton Keynes) and get behind us in our last home game of this remarkable season to show your support and appreciation for the League Champions ahead of the playoff finals.”