Tigers See Off Barons To Progress To Semi Final 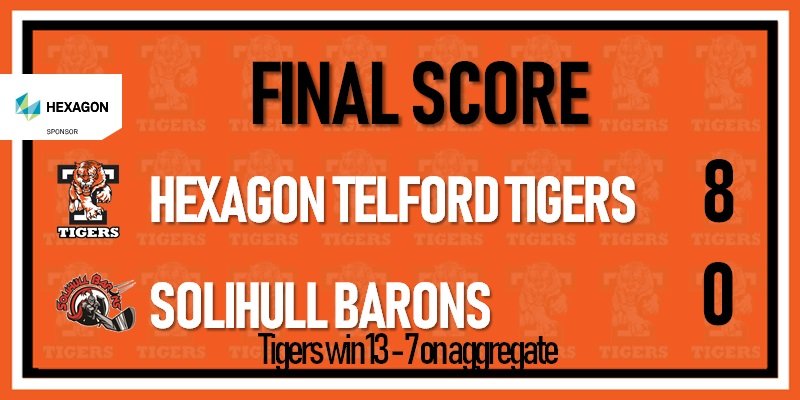 Tigers See Off Barons To Progress To Semi Final. Hexagon Telford Tigers 1 played the second leg of their NIHL North Playoffs Quarter Final on Sunday night at Telford Ice Rink against local rivals Solihull Barons. With the formation of the new top division of the NIHL, the game represented the last time the two teams would meet. Barons had won the first leg of the contest 7-5 the previous evening, leaving Tigers a two goal deficit to make up.

Tigers were able to add Andy McKinney to the line up after his return from suspension and also added Fin Howells, Dan Mitchell, Jed Moreland, Henry Adams and back up net minder Matt Draper.  Tigers started in goal with Tom Hovell, Solihull started with Josh Nicholls.

Tigers started the game much better than the previous evening and saw Ricky Plant almost score with a wrap around shot in the first minute which Nicholls saved with his pads. Tigers were presented an early chance on the power play after Solihull’s Paul Stanley was called for slashing. Tigers controlled the puck well and Jason Silverthorn passed to the centre of the ice to the onrushing Jonathan Weaver who hammered a slap shot into the roof of the net for the opening goal of the game. Tigers cancelled out Baron’s lead from the first leg in the 10th minute. Plant found Silverthorn unmarked in the slot and Silverthorn struck a wrist shot past the stranded Nicholls for Tigers’ second goal.  Tigers’ dominance continued when Plant hit the post and Joe Aston’s close range shot was saved by Nicholls.  Tigers took their first lead of the tie in the 15th minute, Corey Goodison’s shot from the blue line was saved by Nicholls but Scott McKenzie was first to the rebound to tap home the third goal and give Tigers a one goal aggregate lead at the end of the period.

Tigers continued their dominance in the second period and added further goals to increase their aggregate lead. In the 24th minute, Weaver scored his second goal of the game with an unstoppable slap shot after being set up by McKinney.  Jack Watkins then scored when he collected a rebound from Weaver’s shot and slid the puck into the empty net to give Tigers a 5-0 lead at the end of the period.

Solihull were feeling the pace of the game and conceded again early in the third period. Brodie Jesson firing home from the left circle with a wrist shot to put Tigers 6-0 ahead. Tigers’ next goal was scored whilst short handed as Jordan Stokes was serving a roughing penalty. Adam Taylor won the puck and skated in on goal, scoring with a rising shot over Nicholls’ glove into the top corner. McKenzie finished the scoring off with just three seconds of the game left, scoring Tigers’ eighth goal with a low shot to round off a convincing win.

Tigers will now face Sheffield Steeldogs in the semi final over two legs next weekend.

After the game coach Tom Watkins commented, “It was a much improved performance this evening, the difference 24 hours makes! We were focused, disciplined and energetic. We had a big challenge coming into tonight’s game two goals behind, but played a strong 60 minutes with our leadership group of Weaver, Silverthorn, Plant and McKenzie having strong games. I’m pleased for Tom Hovell picking up a shutout tonight after the guys in front of him let him down last night. This sets up another big tie against the Steeldogs.”

NOTE: Tickets for the Semi-Final fixture are not included with the Tigers season tickets.

All tickets will go on sale Monday 25th March 2019. Season Ticket holders seats will initially be reserved until 17:00 on Wednesday 27th so they can guarantee their normal seats as required. These seats will then be released for general sale on Thursday.

Season Ticket holders should contact The Place Theatre Enquiries on 01952 382370 with their name, current seat allocation and seat type (Adult, Child etc.) in order to book their reserved seats.

All other seats can be booked either via the box office or online.