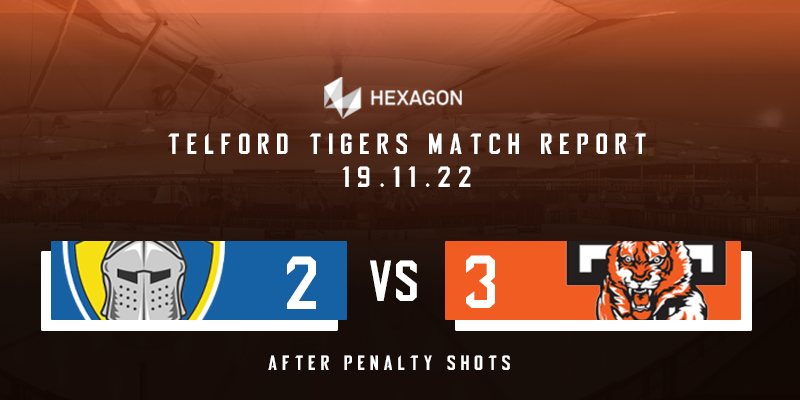 Tigers shoot-out victory. Hexagon Telford Tigers travelled to Leeds for the first of back to back games against league leaders Leeds Knights on Saturday evening. Tigers were short benched after Bayley Harewood left the club in the week to join Bristol Pitbulls and long term absentees Deakan Fielder and Jonathan Weaver were joined on the sidelines by Jack Watkins, Nick Oliver and Scott McKenzie.  Tigers had managed to obtain the service of Ross Kennedy and Jared Dickenson on a short term loan from Deeside Dragons to bolster the squad but it looked an ominous task against a strong Leeds team.

A goalless first period saw both team pressing for the opening goal but netminders Brad Day and Sam Gospel were in good form.

Tigers opened the scoring midway through the second period with Fin Howells continuing his recent run of point scoring by setting up Brodie Jesson for the opening goal of the contest.

Leeds hit back within a couple of minutes of Telford scoring with an unassisted goal from Cole Shudra, beating Day with a low shot that gave him no chance.

With chances at a premium, Telford edged back in front early in the third period. Top scorer Vladimir Luka buried a wrist shot past Gospel to give Tigers a narrow lead. But Telford only held the lead for two minutes as Shudra equalised again.

Tigers had a perfect opportunity to win the game with a power play in the final two minutes of the third period after Shudra was called for boarding. Despite constant pressure on the Leeds’ goal, Tigers could not score and the game went to overtime.

A minute into the extra period, Sam Zajac was called for tripping and Tigers were given another power play chance to end the game. Telford were again frustrated by the Leeds’ defence and the chance disappeared. With no further scoring, the game went to a penalty shoot out.

Luka and Howells scored for Tigers and Day saved Leeds’ first two attempts. Shudra scored for Leeds and after misses from Jason Silverthorn and Rhodes Mitchell-King, Leeds needed to score their fifth penalty to keep the shoot out alive. Zach Brooks’ shot was brilliantly saved by Day to win the game for Telford and send the team to a terrific hard fought victory.

Tigers play Leeds again at home in their next game.

After the game Head Coach Tom Watkins, commented, “To be honest, we should have won it in regulation time with the power play opportunity we had in the final minutes. We then should have won it in overtime with another power play chance, but we had the character to pick ourselves up and win the shoot-out. The team were huge tonight and every player stepped up to the challenge, solely focused on the task in hand and executed it perfectly. Leeds had chances as we were playing a very talented offensive team and we had five players missing but we were gritty, smart in possession and had a fantastic result in a tough rink to get any points from.”