Tigers 2 shot down by Jets 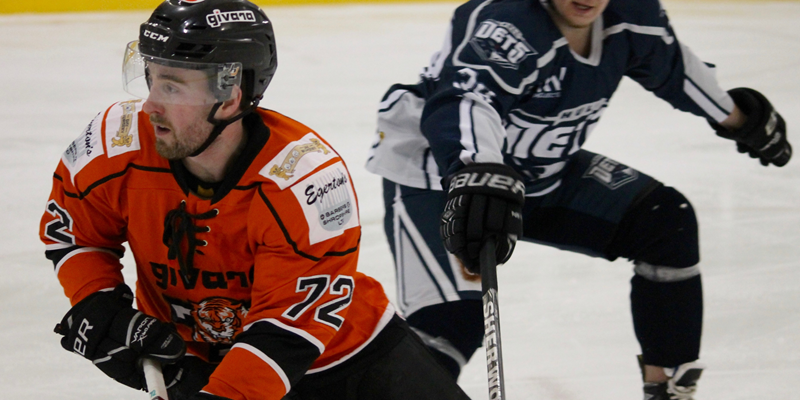 Tigers 2 hosted Hull Jets on Saturday at Telford Ice Rink to try and rectify the score of their previous meeting at Hull.

The game started in the Tigers favour with an even handed goal from #27 Callum Griffin assisted by #59 Jordan Jolly at 6.25. Tigers had numerous shots on goal throughout the first period, but unfortunately could not find the back of the net.

2nd period started physical with numerous penalties being given against the tigers. This allowed The Jets to maximise their chances and score 3 goals to gain the lead.

Tigers continued to push forward and it was end to end hockey. A goal at 33.23 from Tigers #39 Charlie Hammerton, assisted by #4 Karol Jets and #6 Will Reed brought the score to 2-3. This was short lived as Hull scored an even handed goal at 35.09.

Tigers to continued to put pressure on the Hull net and were rewarded with a goal from the blue line at 36.56 from #18 Joshua Hustwick assisted by #39 Charlie Hammerton and #4 Karol Jets.

3rd period was again end to end play with shots from both teams hitting the posts and both goalies making great saves.

Unfortunately it was The Jets that managed to find the back of the net at 52.07 to score a power play goal and take the game 3-5.

Tigers Man of the match- #6 Will Reed