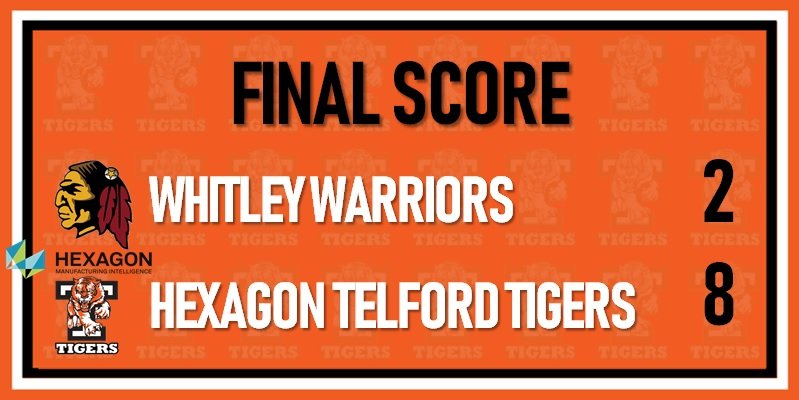 Tigers Show Warrior Spirit, the Hexagon Telford Tigers 1 took a long road trip to Whitley Bay to take on the Warriors on Sunday night. Tigers had opened the season in style the previous night with a convincing 12-1 win over Nottingham Lions at Telford Ice Rink.

Tigers were without key defender Jonathan Weaver and started the game slowly. The team were forced to kill off an early 5 on 3 power play for Whitley, when Adam Taylor was called for hooking. Shortly after, the team took a delay of game penalty which was served by Scott McKenzie. A further penalty was given in the 10th minute when Brodie Jesson was called for charging but it was Tigers who would score the game’s opening goal, whilst shorthanded, when Captain Jason Silverthorn scored from Ricky Plant’s pass.

Tigers were taking far too many penalties and were finally made to pay in the 16th minute when Whitley’s Callum Watson scored on the power play after Jack Watkins had taken a high sticking penalty.

Tigers regained the lead in the 18th minute when McKenzie fired home from an Andy McKinney pass to end the period 2-1 ahead.

Tigers extended their lead just 44 seconds into the 2nd period when Silverthorn scored his 2nd of the night. In the 29th minute Tigers added a 4th goal, Silverthorn completing his 2nd hat trick of the weekend, with Plant supplying his 3rd assist of the night for the goal. Less than a minute later, Jack Watkins scored the Tiger’s 5th goal from McKinney’s pass.  Just as it seemed Tigers were running away with the game, another penalty cost them. McKinney was called for interference and Whitley scored their 2nd power play goal of the night through Dean Holland. Tigers lead was cut to 3 at the end of the 2nd period.

The 3rd period was scrappy but Tigers scored their 6th goal in the 48th minute through Plant and added further goals from Joe Hazeldine and Andy McKinney to round off a convincing performance and secure a 4 point weekend to start the season.

Man of the Match: Denis Bell.

After the game Coach and General Manager Tom Watkins said, “ It was a good performance in very wet conditions as the ice surface made it difficult to move the puck. The guys had to battle hard all over the ice and I was very pleased with our team spirit tonight because Whitley play with a lot of energy. There were some good individual displays, but overall it was a solid performance on the road.”

Hexagon Telford Tigers 1 next play at Telford Ice Rink at 19:00 on Saturday 8th against Whitley Warriors.  For details of all future fixtures, check out the Tigers 1 fixture list.