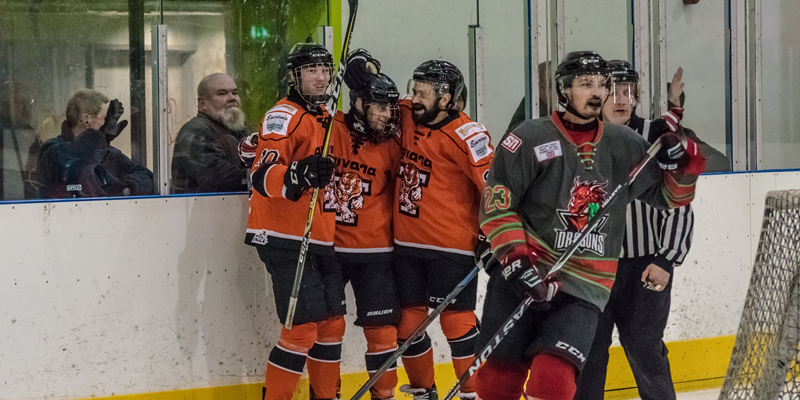 Telford Tigers 1 took on bottom of the table Deeside Dragons at Telford Ice Rink on Saturday night.  Tigers were looking to climb the table after losing top spot to Sheffield Steeldogs in recent weeks and dropping to third.  Tigers were again without Jonathan Weaver and coach Tom Watkins but added new back up net minder Jonah Armstrong to the line up.  Deeside iced former Tigers fans’ favourite Owen Bennett.

Tigers started the game in dominant fashion and both Jed Moreland and Dan Mitchell had good chances early on but both were denied by the Deeside net minder Graeme Bird. Tigers’ dominance finally paid off in the 12th minute whilst on the power play. Adam Jones’ blue line shot was tipped through the legs of Bird by Captain Jason Silverthorn to give Tigers the lead. Just over a minute later Tigers scored again, Adam Taylor’s shot was blocked in front of the goal leaving Joe Miller with a simple tap in. Tigers then got a 3rd goal in the final minute of the period, Miller sent former Deeside Coach Scott Mckenzie through on goal, McKenzie scoring from a tight angle with a low wrist shot.

The 2nd period saw Tigers score at will. The 4th goal came in the 25th minute, McKenzie’s shot was only partially stopped and Taylor was first to the rebound to tap the puck home. A 5th goal was scored just 14 seconds later when Warren Tait set up Dan Mitchell to score with a wrist shot from the left circle. A minute later, Tigers’ 6th goal came with Brodie Jesson setting up Silverthorn for his 2nd goal of the night.

Almost exactly halfway through the game, the 7th goal was scored with Ricky Plant tipping Silverthorn’s pass into the net. Tigers then changed their net minder, with Bell being replaced by Armstrong for the remainder of the game. Jesson scored his first ever senior goal in the 31st minute from Tait’s pass to put the Tigers 8 goals ahead. Tigers weren’t finished yet as Taylor spun 360 degrees to get away from a defender and then fired a wrist shot into the corner of the net for the 9th goal. A 10th followed shortly after when Jack Watkins scored a back handed wrist shot with the Deeside net minder out of position.

The period ended on a sour note for Tigers with Danny Rose cut through a high stick from Deeside’s Ross Kennedy, who received a 5 minute match penalty and was ejected from the game. Rose would not return for the 3rd period.

The final period saw only two more goals, one from each team. Deeside scored in the 44th minute through Simon Furnival and Tigers’ Dale White scored from Tait’s pass in the 46th minute to have the final say on the scoresheet.

Man of the match – Dan Mitchell.

After the game Coach Tom Watkins said, “The most important thing tonight was the two points.

We started slowly but went up a level in the 2nd period with some solid goals. The pick of the bunch for me was Brodie Jesson’s goal. It started behind our goal and with some slick passing between 3 or 4 guys and a nice finish from Brodie for his first goal as a senior player.”