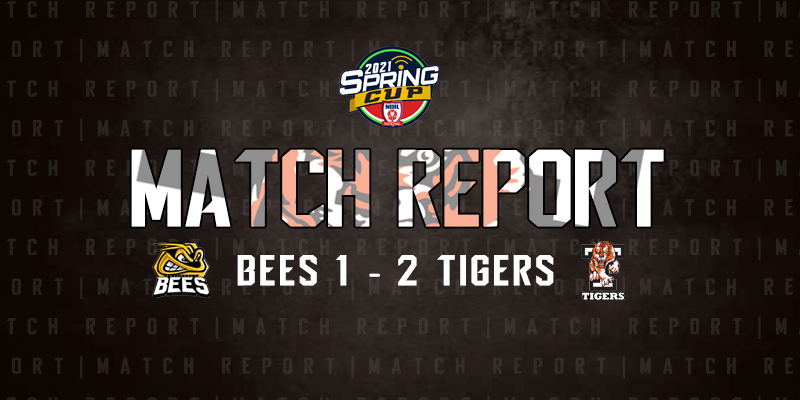 Tigers Sneak Road Win – Hexagon Telford Tigers took on Bracknell Bees at Slough Ice Arena on Sunday afternoon in the second of back to back games in the Spring Cup competition. The Bees had been forced to relocate from their former rink in Bracknell last season and have moved to Slough to play their home games.

Tigers faced the Bees on Saturday at home and won a hard-fought 5-1 victory. The win represented a third win in the competition and saw the Tigers top of the early standings, level with Cup favourites Sheffield Steeldogs on points but ahead on goal difference.

Tigers had a full roster available with the exception of Corey Goodison and Ash Calvert.

Jordan Hedley started in goal for Telford with Adam Goss in the Bracknell net.

The Tigers started strongly and had an early power-play chance when Bracknell’s Josh Martin was given a penalty for a check from behind. Tigers peppered the Bees’ goal with shots but could not get past Goss. The Tigers finally broke through late in the first period with a goal whilst both teams had players in the penalty box. Ciaran Long for Bracknell and Sam Jones for Tigers were serving penalties when Jonathan Weaver combined with Danny Rose to set up Scott McKenzie who looped a shot into the top corner past Goss’ despairing dive. Tigers were then hit with a late equaliser when Bracknell levelled the game with a goal with just 0.6 seconds left in the period. Vanya Antonov’s wrist shot beating Hedley to send the sides to the break tied at 1-1.

The second period was as close as the first with both teams having chances and the small ice pad restricting any fluid play by both teams. McKenzie had an early chance but a good save from Goss prevented a goal and also stopped Robert Lachowicz from scoring with the rebound. Ross Venus broke in on goal but again, Goss was able to make the save and deny Tigers. However, a late goal would see the Tigers ahead at the end of the period. Jack Watkins won a clean faceoff draw in the Bracknell zone and found Austin Mitchell-King with his pass. Mitchell-King drilled a low shot past the screened Goss to score his first Tigers’ goal and give Telford a 2-1 lead.

Tigers attacked from the first whistle of the third period and Kieran Brown, Venus and McKenzie all drew saves from Goss early on. Hedley was called into action several times as Bracknell looked to catch Tigers on the break. As the game entered the final stages, the Tigers were given a power play when Deakan Fielder was called for slashing. Despite the power play, the Tigers almost conceded when Antonov and Josh Waller broke in on Hedley but the Tigers’ netminder managed to block the shot and not give up a rebound. For the final minute, Bracknell pulled Goss from the goal to add an extra attacker but the Tigers managed to see out the remaining time and hang on to win their fourth straight game and record back to back four-point weekends.

After the game Head Coach, Tom Watkins commented, “ Four point weekends are always good but we had a huge let off in the last minute when the Bracknell player missed a glorious chance. The power play is still not clicking which is frustrating and it feels like we missed a few good chances but I don’t want to be too negative after another strong weekend. Players are still finding their feet and their fitness so I’m pleased to sneak a win on the road.”