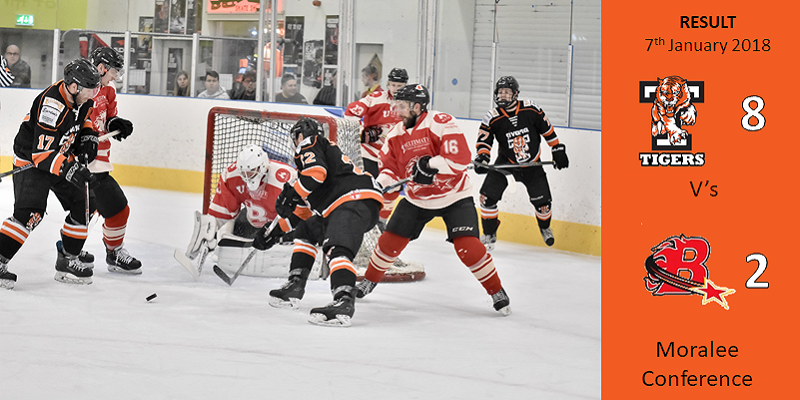 Telford Tigers 1 returned to NIHL Moralee Division action on Sunday night at Telford Ice Rink against Billingham Stars. Tigers had lost 5-3 the previous night in Basingstoke in the National Cup, although the result did not matter as Tigers had already qualified for the quarter finals. Tigers were looking to return to winning ways in the league after an overtime loss against Solway Sharks in the last league game, starting the game 4 points behind leaders Sheffield Steeldogs, albeit with a game in hand.

Tigers opened the scoring in the 2nd minute when Scott McKenzie’s neat spin to get away from a defender, set up a Dale White shot which was only partially saved, leaving a rebound for Jack Watkins to poke home. The period saw numerous penalties called on both teams and Tigers managed to kill off a 5 on 3 power play for Billingham. In the 19th minute Tigers added a 2nd goal through Captain Jason Silverthorn.  Tigers caught Billingham out whilst they were changing lines and Brodie Jesson’s pass found Silverthorn unmarked in front of the goal and he made no mistake with a powerful wrist shot into the roof of the net to leave the Tigers 2-0 ahead at the end of the period.

The 2nd period saw Tigers take full control of the game. Adam Taylor scored in the 26th minute with a tap in after a pass from behind the goal by Silverthorn to make it 3-0. Billingham scored through Michael Bowman, before Ricky Plant added Tigers’ 4th goal with a shot from close range. Tigers then scored 3 quick goals to take the game away from Billingham. McKenzie scored on the power play to make it 5-1 from Plant’s pass. Plant then skated from his own defensive zone and set up Silverthorn for his 2nd goal of the night with a precise pass to increase the lead to 6-1. Tigers finished the period with a 7th goal, scored by Dale White, who created a chance himself and fired home with a powerful wrist shot.

Tigers changed net minders at the start of the 3rd period with Jonah Armstrong replacing Dennis Bell. In the 43rd minute Michael Elder scored Billingham’s 2nd goal whilst short handed. Tigers would have the last word on the score sheet after Brodie Jesson scored in the 56th minute from Plant’s pass to give Tigers an 8-2 victory.

Man of the match – Jordan Stokes

After the game coach Tom Watkins said, “ It was a good result and decent performance tonight,

it was nice to be able to give Jonah some minutes and I thought he made some good saves.

I think at this time of the year it’s important for us to focus on the process and the small things as it’s those that make such a difference in the one goal games. The process is where we will focus our attention in the upcoming weeks. Overall I was pleased with the nights work.’

Telford Tigers 1 will complete their National Cup Group D games on Thursday 11th January against Bracknell Bees with a 7:30pm face off. For ticket details and further information go to www.telfordtigers.net